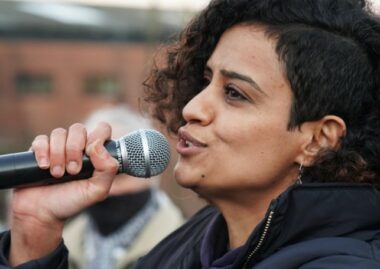 SHEFFIELD, Saturday, January 29, 2022 (WAFA) – Sheffield Hallam University has reinstated Palestinian Ph.D. student lecturer and activist Shahd Abu Salama, suspended from work after she was targeted by pro-Israel groups for her activism in support of Palestinian rights.

“I met with Sheffield Hallam HR today, accompanied by my UCU (University and College Union) representatives. The university admitted that there had been issues with the way my case has been dealt with and has reinstated my teaching with immediate effect,” wrote Abu Salama in a tweet.

“I am still considering my response. I still hadn’t a sight of the allegations against me, which Sheffield Hallam University has stated that they remain under investigation,” she said, adding “UCU representatives drew attention to the harm caused by the University’s decision to announce the existence of an investigation without my knowledge and insisted that the University should apologize for the way I have been treated.”

Abu Salama’s case has drawn wide support among UK student organizations, who wrote letters of support on her behalf, and students demonstrated at Sheffield Hallam University on Wednesday demanding her reinstatement.

“Zionist racist publications/trolls have renewed online bullying to discredit my academic reputation, protesting my recent appointment as an Associate Lecturer at SHU. Meanwhile, I’m getting creepy emails about people trying to hack my Twitter. Don’t let them silence Palestine,” Abu Salama, from the Gaza Strip, wrote on Twitter on January 19 when she came under attack for writing about life in the Israeli-besieged Gaza Strip, which faced three Israeli wars since 2008.