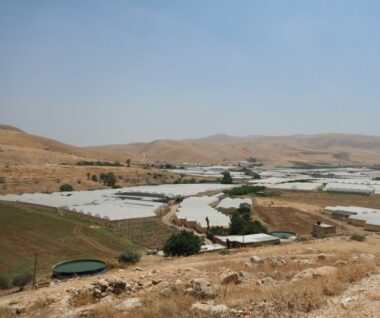 The Palestinian Ministry of Agriculture issued a statement denouncing the upcoming demolition of the water reservoir and said: “Israel’s illegal occupation is waging a war even on the water that Palestinians use for drinking and agriculture.”

It added that such decisions aim at the forcible exile of the Palestinians from their lands, and said that the decision, which was made during extensive snow covering various parts of occupied Palestine, is just another proof of the cruel and criminal nature of the Israeli occupation.

The Ministry stated that the water reservoir was built with the support of the Palestinian Authority as part of a variety of projects approved by the government to aid the farmers who are subjects to extreme water shortages in addition to escalating violations by the Israeli soldiers and the illegal colonizers, living on stolen Palestinian lands.

It is worth mentioning that the demolition order was issued on January 5th, and was based on military order #1798, aiming at speeding the demolitions of Palestinian buildings and structures in Area C of the occupied West Bank.

The Palestinian, Abu Thabet, first headed to the Jerusalem Legal Aid and Human Rights Center, before its legal team filed an urgent appeal in cooperation with the Wall & Colonization Resistance Commission, and the Legal Counselor in Nablus.

However, it took the so-called Civil Administration Office, the administrative branch of Israel’s illegal occupation, only five days to deny the appeal, before the Jerusalem Legal Aid and Human Rights Center filed an appeal with the Israeli Prosecutor’s Office, asking for some time to prepare a second appeal.

On January 23rd, 2022, the Israeli Prosecutor’s Office presented its response to the court, before the court issued a ruling denying the Palestinian appeal and imposing a fee of 3500 Shekels in court costs.

The Palestinian Ministry of Agriculture said the Israeli ruling aims at paving the way from the demolition and displacement of the al-Khan al-Ahmar Bedouin community, east of Jerusalem, and came after Israel decided to demolish Ein Samia school, east of Ramallah.

It is worth mentioning that the year 2021 witnesses the highest number of home and structure demolitions in the West Bank, including Jerusalem, in five years.

It is worth mentioning that Furush Beit Dajan is home to 1200 Palestinians who depend on agriculture and livestock as their only sources of livelihood and are subject to constant Israeli violations while Israel is also reusing to connect the village to water lines in the area.

The Israeli occupation authorities also confiscated 11.000 Dunams of the 14.000 Dunams of Furush Beit Dajan, before building two illegal colonies (Mehola and al-Hamra) on the stolen Palestinian lands, in addition to installing a permanent military roadblock.

The demolitions and the theft of Palestinian lands are taking place although Israel dug two artesian wells, producing thousands of cubic meters of waters, but are segregated and solely meant for the illegal Israeli colonizers.

The Palestinians in the area get their water from several springs and tried many times to build water reservoirs to use during the many months of drought.

They also built a 500 cubic meters water reservoir, however, after a legal battle lasting five years, Israel demolished the reservoir without warming, in the death of night on July 15, 2021.