WAFA: “Heads of churches in Jerusalem condemn settler’s breaking into a church-owned hotel in Jerusalem” 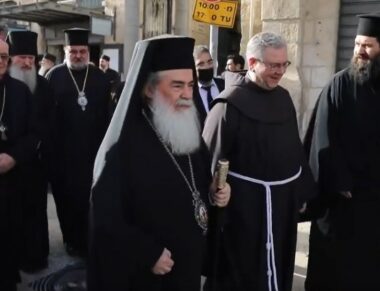 JERUSALEM, Tuesday, March 29, 2022 (WAFA) – Heads of churches in Jerusalem expressed their condemnation and rejection of settlers’ breaking into the Little Petra Hotel, a place of rest of Christian pilgrims for decades, in the Old City of Jerusalem.

A delegation of Heads of churches in Jerusalem, foreign diplomats, and Islamic and Christian figures, affirmed during a visit to the hotel their support for the hotel’s management and employees, denouncing the settlers’ storming of the hotel under the protection of the occupation police.

On Saturday night individuals with Ateret Cohanim broke into the Little Petra Hotel as well as into a local money-changing shop owned by the Patriarchate and rented by a Palestinian Jerusalemite at the hotel’s entrance.

Secretary-General of the Islamic-Christian Committee to support Jerusalem and holy sites, Hatem Abdel-Qader, said that this visit is an act of solidarity with the Petra and Imperial hotels which belong to the Greek Orthodox Patriarchate in Jerusalem, stressing the importance of two sites that serve as gateways to the Old City of Jerusalem and Christian holy sites.

The Higher Presidential Committee of Churches Affairs in Palestine denounced settlers’ ongoing hooliganism which threatens the Christian and Ecclesiastical presence in Jerusalem.

President of the Higher Presidential Committee of Churches Affairs, Ramzi Khoury, called on the international community, the United Nations, international institutions and the Arab, Islamic and Christian world to immediately intervene to stop this settlement attack, which gives the Palestinian-Israeli conflict religious causes, thus leading lead to serious escalations.

He called for protecting the Islamic and Christian holy sites and properties, particularly in Jerusalem.