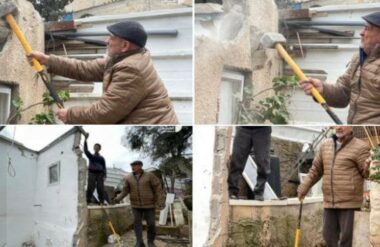 She said that the municipality staff forced Jamal Abu Nejmeh to complete the demolition of his store in the neighborhood, under the pretext that it was built without a permit, to avoid paying exorbitant fines if the Israeli municipality of Jerusalem carries out the demolition on its own.

Abu Nejmeh said that for decades he suffered from Israeli authorities’ orders against his store, noting that he repeatedly tried to appeal the demolition order, to no avail. The municipality informed him that he had only two options; either demolish the shop himself or have paying expensive demolition costs to the Israeli municipality in case it carries out the demolition.

Although Palestinians in East Jerusalem, a part of the internationally recognized Palestinian territory that has been subject to Israeli military occupation since 1967, are denied their citizenship rights and are instead classified only as “residents” whose permits can be revoked if they move away from the city for more than a few years.

They are also discriminated against in all aspects of life including housing, employment, and services, and are unable to access services in the West Bank due to the construction of Israel’s separation wall.

According to a report by the Israeli human rights group B’Tselem, the Israeli High Court could be liable for war crimes for their policies that led to the dispossession of Palestinians from their properties in Area C of the West Bank.

The report, Fake Justice, shows that the court’s support of Israeli planning policy is tantamount to support for dispossession and forcible transfer of Palestinians, a war crime under international law.