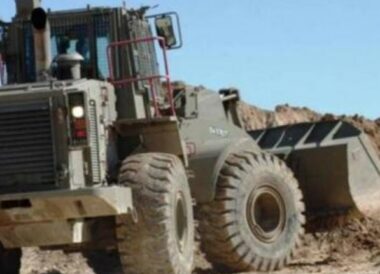 He said that the destroyed road had been partially paved for 20 years and that three months ago, following coordination with the Israeli military government, work on the rehabilitation of the road started. However, two days after the start of the work, the military forces raided the area and seized the vehicles used in the work, imposing a fine on their owners.

Nofal said that despite continuous promises to allow the rehabilitation work, the army sent its bulldozers today to destroy the road under the pretext that the road is located on “state land”.

The destruction of the road led to depriving farmers of access to their lands on the western side of the village, he said, and isolating several houses, noting that this is not the first time the Israeli military has targeted the village.

Ras Karkar suffers from the presence of seven iron gates at its entrances that limit the movement of people and access to their homes and lands.

At the same time, the Israeli military government does not allow it to carry out any work to improve the village’s infrastructure, said Nofal.