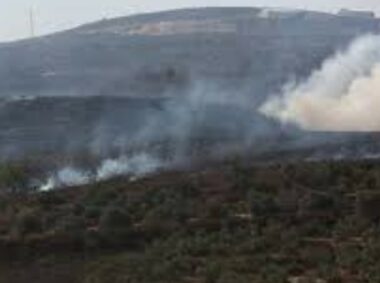 He said colonizers set fire to Palestinian farms located near the former settlement of Homesh, which was evacuated in 2005, but that the Palestinian residents in that area were able to put off the fire, which has caused damage to crops and trees.

The arson in Burqa occurred on the same day settlers cut down dozens of olive trees in nearby Salem and Jaloud villages.

Daghlas said the settlers have intensified their attacks against the Palestinian citizens and towns as farmers embark on harvesting their olive crops.

Prime Minister Mohammad Shtayyeh today called on the United Nations to send teams to monitor Israeli settler terrorism against Palestinian civilians in the occupied West Bank, demanding that the settlers should be prosecuted in international courts for their state-sanctioned crimes against the civilian Palestinian population.