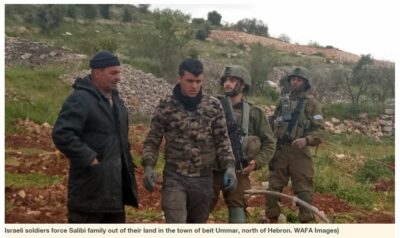 Awad told WAFA Israeli forces, accompanied by a group of settlers, held a Palestinian farmer along with his family for over two hours in their 5-dunums of land before forcing them out of the land for lacking an entry permit.

Israeli forces prevented the al-Salibi family from cultivating their land, located adjacent to the Israeli settlement of Karmei Tzur, built illegally on Palestinian land to the south of Beit Ummar town, and forced them out of the land.

Forces further destroyed the iron poles placed by the family for the construction of a greenhouse.

To be noted, Palestinians whose land lies behind the separation barrier must obtain special permits – which are not easily granted and are often given to only specific family members – to enter their land.

According to the al-Haq Human Rights center, Israel imposes restrictions on Palestinian farmers who want to access the olive groves located in proximity to settlements or behind the Annexation Wall.

“Palestinian farmers are required to apply for permits to be allowed entry into their own lands. Palestinians are often denied permits or granted insufficient time to adequately tend their land; these restrictions often become more severe during olive harvest season,” said the center.

In addition, during the harvest season, Palestinian farmers are often subjected to harassment and attacks by Israeli settlers, including the destruction, damage, and burning of olive trees.

Israel continues to deny Palestinians their fundamental right to self-determination, including the principle of sovereignty over land and natural resources, depriving them of their means of livelihoods, in contradiction to Article 1 of the International Covenant on Civil and Political Rights (ICCPR), said al-Haq in a story published in November 2014.

“Under international humanitarian law and as stated in the Fourth Geneva Convention, Israel has an obligation not to restrict the right to work of Palestinians in the Occupied Palestinian Territory (OPT),” added the center.

“The Annexation Wall and the permit system amongst other measures and policies applied by Israel prevent Palestinians’ right to movement, which seriously impacts their livelihoods,” said al-Haq.