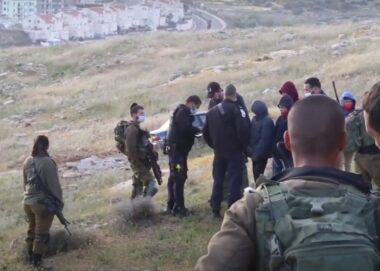 On Sunday, Israeli colonialist settlers, accompanied by many soldiers, invaded large areas of Palestinian lands in the al-Baq’a area, east of Hebron, in the southern part of the occupied West Bank.

Resident Aref Jaber told the Palestinian News & Info Agency (WAFA) the invasion is the seventeenth in recent months and added that the colonists are trying to illegally annex the lands from their Palestinian owners to establish an outpost.

Jaber added that the families have repeatedly filed complaints with the army; however, the colonists continue to invade the land despite the military presence and said that the soldiers continue to protect the invaders instead of removing them. Jaber also said that he personally filed five complaints with the Israeli police, but the settlers continue to invade the lands as part of their attempts to establish a new outpost.

In related news, Israeli forces kicked Palestinian farmers out of their land in the town of Beit Ummar, north of Hebron, WAFA said.

The International Court of Justice (ICJ) affirmed that the rules of the Geneva Conventions constitute “intransgressible principles of international customary law”. Only a limited number of international norms acquire this status, which is a reflection of the seriousness and importance with which the international community views them. Breaches of these norms give rise to certain obligations on all other states, or “third states”, which are explained below.