WAFA: “Israeli Settlers Set Up Tents As Nucleus Of An Outpost Near Hebron” 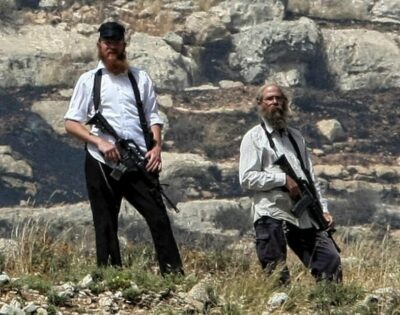 HEBRON, Thursday, September 8, 2022 (WAFA) – Israeli settlers today set up tents on a tract of land in Birin village, southeast of Hebron city, according to a local municipal source.

Head of Birin Village Council, Farid Burqan, said that scores of settlers, under military protection, took over a tract of land belonging to the Burqan family in the southern West Bank village, erected several tents on it and hoisted Israeli flags and banners with anti-Palestinian hate slogans as a prelude to set up a new colonial settlement outpost.

The settlers came from the colonial settlements of Susiya, Kiryat Arba and Bani Haiver.

Burqan added that the soldiers took photos for several Palestinian-owned houses and agricultural structures in the area, while pointing that the settlers have been attempting to seize some 440 donums belonging to the villagers under the flimsy pretext of being classified as “state land”.

According to the Land Research Center, Israel has frequently issued military stop-construction and demolition orders against various residential and agricultural structures and dismantled barns in the locality, citing the lack of rarely issued construction permits as a pretext.

In December 2017, Israel delivered stop-construction orders to the locality’s sole clinic and building intended to serve as a primary school for the community’s 60 children

In June 2019, as showed in a PLO’s Negotiations Affairs Department’s report, Israel seized 4,800 dunams of land from several localities, including Birin, for the expansion of Bani Haiver.

Located to the southwest of Bani Na‘im, Birin has a population of 160 and is flanked by Bani Haiver colonial settlement from the east and the settler-only bypass Road No. 60 from the west. Its residents were originally expelled from Naqab in southern Israel and now depend on agriculture and livestock as their main source of livelihood.

Israel’s nation-state law that passed last July stated that building and strengthening the settlements is a “national interest.”