WAFA: “Pregnant Woman Among 17 Palestinians The Israeli Army Has Detained In Occupied Territories” 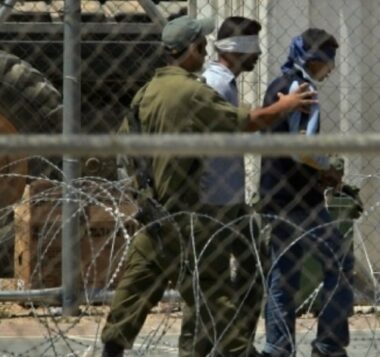 RAMALLAH, Monday, December 19, 2022 (WAFA) – The Israeli army detained this morning 17 Palestinians in raids across the occupied territories, including a 36-year-old woman who is in her fifth month of pregnancy and a mother of five children, according to the Palestinian Prisoner’s Society (PPS) and other sources.

The PPS said the army detained Nihal Mohammad Rib’ey after raiding her home in the town of Yatta in the south of the West Bank despite being in her fifth month of pregnancy.

Local activist Rateb al-Jabour told WAFA that soldiers also detained two high school students in Yatta, and a fourth was detained in the town of Dura, south of Hebron, whose two brothers are in Israeli custody. The soldiers searched and ransacked the family house, said Jabour.

Soldiers also detained three Palestinians in the southern West Bank district of Bethlehem, including two former prisoners from Dar Salah and Obeidiyeh, and the third from the town of Tuquo, southeast of Bethlehem. According to Palestinian security sources, the soldiers also ransacked their homes during the arrest.

Three young Palestinians from the Attoun family were also detained in the Sur Baher neighborhood of occupied East Jerusalem in a raid at their homes. The three were beaten during the arrest, reported a WAFA correspondent.

The Israeli occupation forces also detained a former prisoner in the town of Burqin, west of the northern West Bank city of Jenin.

The PPS said arrests were also reported in Qalqilya, in the north of the West Bank.