WAFA: “Presidency warns of Israeli restrictions on the entry of Christians to Church of Holy Sepulcher” 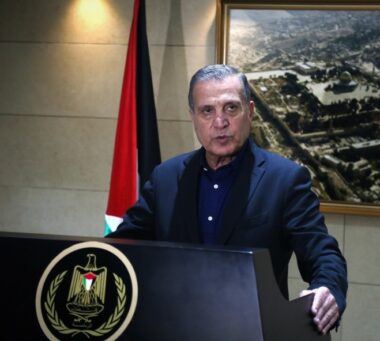 RAMALLAH, Thursday, April 21, 2022 (WAFA) – Nabil Abu Rudeineh, spokesman for President Mahmoud Abbas, warned today of the danger of the Israeli decision to impose restrictions on the entry of Christian worshipers to the Church of the Holy Sepulcher in occupied Jerusalem.

“This decision is a continuation of the Israeli escalation against the city of Jerusalem and its sanctities and coincides with the continuous incursions into the Al-Aqsa Mosque by Israeli Jewish extremists under the protection of the Israeli occupation forces,” said Abu Rudeineh.

He added that the decision was “a blatant and dangerous challenge to the heavenly religions and their sanctities, a provocation and a disregard for all human and religious values.”

Abu Rudeineh described the Israeli crackdown on the Islamic-Christian presence as “a war against the Palestinian people and Jerusalem and its sanctities, and it is another violation of the historical status quo in the holy city.”

“All the Israeli measures, whether in the Al-Aqsa Mosque, the Church of the Holy Sepulcher, or any other holy religious sites are rejected and are illegitimate,” stressed the presidential spokesman. “All of the measures are a violation of international law that recognizes the State of Palestine with East Jerusalem as its capital on the pre-1967 borders.”

“The Palestinian leadership calls on the international parties to assume their responsibilities to stop these Israeli violations that affect the sanctity of the place and freedom of worship.”