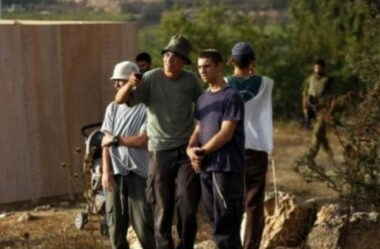 The colonizers assaulted and injured the mayor of Sinjil, Mo’taz Tawafsha, and a council employee along with a farmer Awad Shabana.

The three suffered various cuts and bruises to various parts of their bodies, including the face.

The attacks occurred when the colonizers tried to prevent the Palestinians from plowing and tending to their lands in the northern part of the town.

In related news, Israeli colonizers also invaded the water spring in Qaryout village, south of Nablus in the northern West Bank, after smashing its gate and destroying the fence around it.

They also spilled unknown chemicals that cause a foul smell, polluting the water used for drinking and irrigation, the Palestinian News & Info Agency (WAFA) said.

Also, the colonizers cut trees and broke fences during invasions of Palestinian olive orchards in the al-Lubban ash-Sharqiya village, south of Nablus.