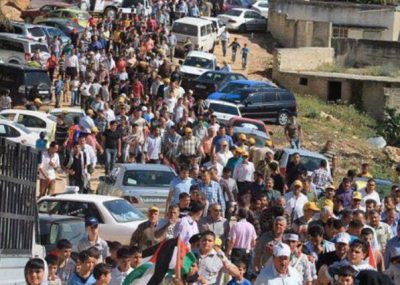 Dozens of Palestinians, and international peace activists, held the weekly nonviolent pretest in Kufur Qaddoum town, in the northern West Bank district of Qalqilia, against the illegal Israeli Annexation Wall and colonies, and the continued closure of the town’s main road, in addition to the escalating Israeli violations.

The protesters started their procession after Friday prayers at the town’s mosque, and marched carrying Palestinian flags, chanting against the ongoing Israeli occupation and violations, in addition to chanting for national unity, liberation and establishing an independent Palestinian state.

Morad Eshteiwy, the media coordinator of the Popular Committee in Kufur Qaddoum, stated that the soldiers were stationed in Kedumim illegal colony, that was built on privately-owned Palestinian lands, and did not attempt to invade the town.

He added that several youngsters marched to a location close to the illegal colony, and burnt tires. No clashes, injuries or arrests were reported.