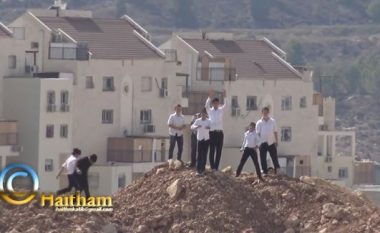 On Friday, several extremist Israeli colonists, taking position on a small hill behind the Annexation Wall, attacked the weekly nonviolent protest against the Israeli wall and colonies, in Bil’in village, near the central West Bank city of Ramallah.

Dozens of Palestinians, accompanied by Israeli and international peace activists, marched from the center of the village, raising Palestinian flags, chanting for national unity, the liberation of Palestine, and the release of all political prisoners.

The protesters marched towards an area that the Israeli army is planning for illegally confiscate, and started a cleanup of the Abu Lemon Reserve, before peacefully marching towards the gate of the Annexation Wall.

Some protesters started banging on the gate, to send a message to Israel and its army that the popular resistance in Bil’in will never stop until liberation and independence, and the removal of all of Israel’s colonies in occupied Palestine, built in direct violation of International Law and the Fourth Geneva Convention.

The soldiers did not attack the protesters, but a number of young fanatic Israeli colonists started throwing rocks at them, in addition to hurling racist insults and curses at them, while the army remained idle. Dr. Rateb Abu Rahma, the media coordinator of the Popular Committee in Bil’in, said two delegations from Norway and Slain visited Bil’in, and listened to a detailed history about the nonviolent resistance in the village, the successes it achieved, and the high human costs resulting from Israeli military attacks.