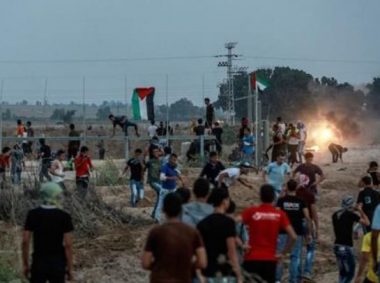 Israeli soldiers shot and injured, on Friday afternoon, one Palestinian east of the al-Boreij refugee camp, in central Gaza, after the army attacked protesters marching in Palestinian lands across the border fence.

Dr. Ashraf al-Qedra, the spokesperson of the Health Ministry in Gaza, said a man, in his fifties, was shot with a live round in his right leg.

Eyewitnesses said an army sharpshooter, who took position near Um Hosniyya hill, east of the al-Boreij, shot the man, while other soldiers fired rubber-coated steel bullets and gas bombs at the protesters.

Border areas in Gaza, including the eastern part of the al-Boreij, witness weekly protests while the soldiers, largely in military towers across the border fence, continuously attack them with live fire, in addition to gas bombs, concussion grenades and rubber-coated steel bullets.

The Israeli army and navy also frequently attack farmers and workers, in their lands close to the border fence, while the navy fishers in Gaza territorial waters and repeatedly abducts many of them and confiscate their boats