WHO: Latest Health Access Report for the Occupied Palestinian Territory 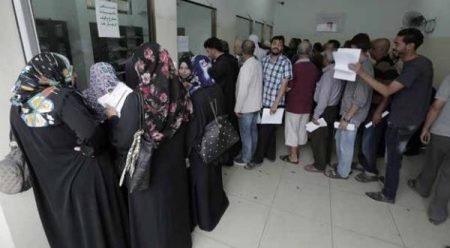 On the occasion of International Day of Solidarity with the Palestinian People, marked by the UN since 1977[1], WHO launched a 2-year report on health access at an event in Gaza, to highlight how the Israeli permit system and physical barriers obstruct health access for Palestinian patients, ambulances and health workers.

The study “Right to health: crossing barriers to access health in the occupied Palestinian territory, 2014 – 2015,” was based on data provided by Palestinian Authority ministries and non-profit health providers, as well as patient interviews and field studies.

“Access is a fundamental element of the right to health. Every mother and child has the right to be together during a child’s cancer treatment,” said Dr. Gerald Rockenschaub, the WHO head of the office in the West Bank and Gaza. “Yet the data indicates substantial restrictions for thousands of patients and their companions who are trying to travel to their places of referral.”

According to the PNN, 48-page report also presents information on the impact of attacks on health facilities, patients and health personnel, and the health access situation in “Area C” in the West Bank, where Israel retains full security and civil authority.

The Palestinian Ministry of Health refers patients to other facilities if the recommended medical treatment is unavailable in Ministry hospitals. 86% of the 162 300 referrals issued by the Ministry in 2014 and 2015 were to Palestinian medical centers, the majority located in East Jerusalem and inaccessible to patients without an Israeli-issued permit. The complex permit regime can result in delays and denial of care for patients which can impact their health; permit restrictions for health personnel can also disrupt medical services. Israeli security services also request certain patients to appear for interviews and deny permits for security reasons.

Denials and delays in responding to health permit applications noticeably increased for Gaza patients who have faced tightened security procedures since 2012 and particularly over the past two years. The number of patients seeking access permits through Erez checkpoint has more than doubled to 21 899 in 2015, while the permit approval rates have steadily dropped: from 92.5% in 2012 to 88.7% in 2013, 82.4% in 2014 and 77.5% in 2015. (Since the writing of the report, the situation further worsened in Gaza: by October 2016, the approval rate had fallen to 44%.)

The closure of the Rafah border crossing between the Gaza Strip and Egypt in July 2013 limited the number of patients able to exit: in 2014 to 3 117 and in 2015 to less than half that, owing to the closed borders.

“This is about freedom of movement at its most raw level – the right to access, literally, life-saving services for you, or an elderly parent or perhaps an infant child” said the UN Coordinator for Humanitarian Aid and Development Activities Mr. Piper at the report launch. “The very idea that a fence, a wall, a security guard, a bureaucrat could stand between you and such life-saving services should fill us all with a shared sense of dread.”

WHO, the Swiss Agency for Cooperation and Development and the Ministry of Health also focused on the importance of advocacy to ensure protection for health and human rights. The Palestinian Ministry of Health and other ministries, UN agencies, donor governments and humanitarian health and human rights organizations attended the event. The report made recommendations to Israel as the occupying power and main legal duty bearer, and to Egypt, to remove restrictions on patients and facilitate access to health services.

[1] To mark the day, in 1947, when the UN General Assembly adopted the resolution on the partition of Palestine (Resolution 181 (II)), which had provided for the establishment in Palestine of a “Jewish State” and an “Arab State”, with Jerusalem as a corpus separatum under a special international regime.