Why Is The Rise Of BDS Worldwide Worrying Israel? 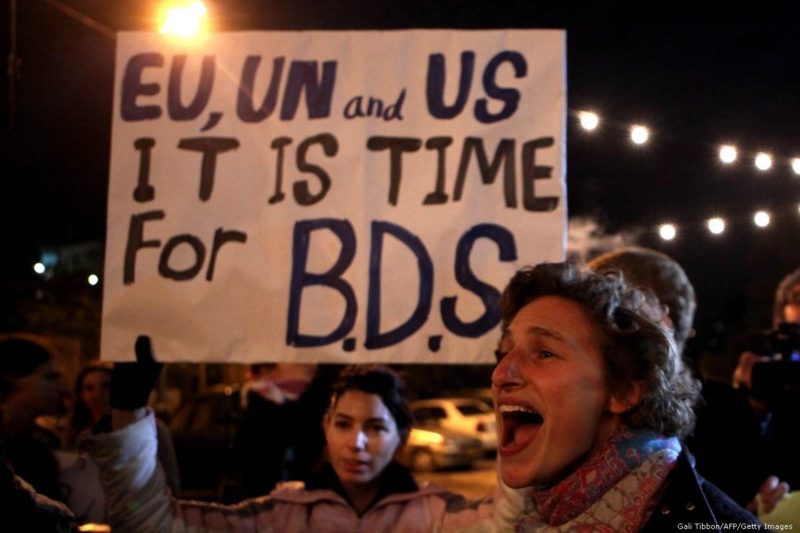 The Boycott, Divestment and Sanctions (BDS) movement is gaining momentum. There is no doubt about this. The Palestinian-led campaign for an educational, cultural and business boycott of Israel aims to get justice, freedom and equality. Inspired by the South African anti-Apartheid movement, BDS started in 2005 by civil society and governments to take action to put pressure on Israel to comply with international law, mainly by ending its prolonged military occupation and colonisation of Palestinian land.

BDS is, by its nature, a non-violent form of resistance. Nevertheless, Israelis believe it to be an existential threat which wants to delegitimise their state’s existence.

The global movement backed by academics, unions, civil associations and grassroots movements has claimed a number of successes in isolating Israel. Last year, for example, 20 singers and artists, including American singer Lorna Del Rey, pulled out of a festival in Israel, following a similar move by New Zealand’s Lorde months earlier. More than 100 artists, including leading lights in film, theatre, literature and music came together to sign a statement in support of her move.

Concern about the growing movement has led to Israel asking its allies and embassies to curb BDS by any means. Millions of dollars have been allocated to this task. Germany responded by becoming the first parliament in Europe to declare that BDS is “anti-Semitic”. At a stroke, the Bundestag labelled supporters of Palestinian human rights as anti-Semites and warned that BDS activity was reminiscent of the Nazi persecution of Europe’s Jews.

The German decision — which was proposed by Angela Merkel’s Christian Democratic Union (CDU), Social Democrats, the Greens and the liberal FDP — came days after the BDS call for artists to boycott the Eurovision Song Contest held in Tel Aviv in May, just 65 km away from the besieged and bloodied Gaza Strip. BDS argued that Israel’s hosting of the event amounted to a “whitewashing” of its policies and treatment of Palestinians in the occupied territories.

In Israel, Prime Minister Benjamin Netanyahu described the anti-BDS decision as “important”. As far as he is concerned, the BDS movement opposes Israel’s very existence, but the Palestinians say clearly that its existence should not be at their expense. Some would argue that Germany’s decision is another manifestation of the pressure exerted by Israel to make Berlin continue to pay for the Holocaust; it has already paid the “Jewish state” billions of dollars in “reparations”, even though Israel wasn’t even in existence when the Holocaust took place.

“The academic and cultural boycott of Israel is strictly institutional and does not target individual Israelis,” BDS declared in response to Germany’s move. “The German parliament’s equation of the nonviolent BDS movement for Palestinian rights with anti-Semitism is based on outright lies. It’s not only anti-Palestinian McCarthyism, but it is also a betrayal of international law, German democracy and the fight against real anti-Jewish racism.”

According to Haidar Eid, an Associate Professor at Al-Aqsa University and political analyst, Berlin’s decision was undemocratic and in violation of the German constitution and the 2016 European Parliament’s “right to boycott” ruling. “The resolution emanates from a country with a history of anti-Semitism in its worst forms committed in WWII,” he wrote. “German parliamentarians know very well that the boycott movement is inspired by the Universal Declaration of Human Rights, which does not discriminate between people on the basis of religion, race, sex, etc. It is clear that the Palestinian blood does not stir the feelings of the ruling elite in Germany, nor did Jewish blood stir the feelings of their fathers!”

Gaza resident Sami Abu Salem thinks that it is sad that Germany is aligning itself with the illegal and inhumane Israeli occupation. “Germany’s decision is shocking, because it means that it does not support justice and international law,” he explained. “It’s ironic that it supports the victims of the Holocaust and turns a blind eye to them victimising others, the Palestinians. It’s a shame that it does not work seriously towards ending Israel’s colonisation of historic Palestine, which led to the uprooting and ethnic cleansing of native Palestinians.”

There are some Palestinians who believe that “anti-Semitism” is being politicised in order to influence decision makers. “The allegation intimidates those who dare to criticise the actions of Israel towards the Palestinians,” alleged Abed Nasser from Gaza. He is not alone in thinking this.

Palestinian BDS activist Majed Abusalama, who went on trial last month in Germany for peacefully protesting against an Israeli parliamentarian’s talk at Humboldt University in Berlin, said that he and his comrades are not surprised at the anti-BDS motion. In fact, they expected Berlin to do everything in its power to cleanse its historical guilt. “We Palestinians should not pay for the sin of the Holocaust,” he insisted, “and we refuse to be called anti-Semitic; we refuse this manipulation of this discourse which serves Israeli propaganda and victimhood at the expense of Palestinian rights.” He labelled the German decision as “completely disrespectful” of the struggle for justice and equality. “It is also completely disrespectful to civil rights in Europe. At this moment, we are stronger and more united in the BDS movement in Germany and Europe.”

International pro-justice and pro-Palestine activists vow that they won’t be silenced or deterred in the wake of the German resolution. “It was an outrageous attack on free speech,” Irish BDS activist Zoe Lawlor pointed out. “Human rights activists in Germany will continue to struggle for freedom, justice and equality for the Palestinian people. BDS is an explicitly anti-racist campaign striving for justice.” Germany is attempting to silence criticism of the Apartheid state of Israel by parliamentarians of a state which continuously ignores the oppression of Palestinians, she added.

When Palestinian-Canadian activist and journalist Khaled Barakat was prevented from speaking about Palestine at a solidarity event held on 22 June in Berlin, the German authorities claimed that his words could be a threat to their relations with Israel. They justified this by alleging that Barakat’s ideas and political activism pose a threat to public safety, and endanger peaceful coexistence between Germans and foreigners.

The fear for BDS supporters now is that more countries will follow Germany and try to ban the movement. This makes it very clear that the nonviolent campaign has had an effect on raising awareness and generating support for Palestinian rights. It remains to be seen, though, if it can bring an end to the injustice and racial discrimination in Palestine under Israeli colonisation, as the anti-Apartheid movement did in South Africa.

Yousef al-Helou is a Palestinian journalist and political analyst from Gaza, based in London. He is a United Nations fellow and alumni, and served as a Reuters journalist fellow at the University of Oxford.