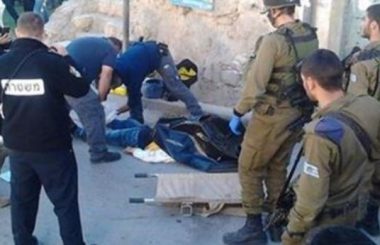 Israeli soldiers shot and seriously injured, Thursday, a young Palestinian man allegedly after attempting to stab Israeli soldiers, near the Ibrahimi Mosque, in Hebron city, in the southern part of the occupied West Bank.

Israeli sources claimed the young Palestinian man attempted to stab the soldiers at a military roadblock, near the mosque.

They added that the young man suffered serious wounds, but did not fall into a coma following his serious injuries, and was moved to Hadassah Ein Karem hospital, in Jerusalem.

The soldiers claimed that the young man, in his twenties, is from Hebron city, and that the soldiers reportedly found a “toy gun and a grenade” in a bag he carried.