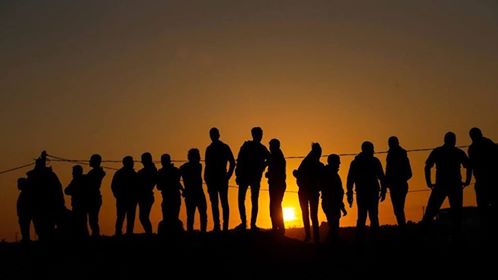 By Abdalrahim Alfarra – Edited By Murad Qubbaj: I was born in the occupied Gaza Strip, in 1993. That same year, my family moved to the United Arab Emirates, where I completed all my school grades, from primary to secondary school. In 2011, I went back to the Gaza Strip and got enrolled in a local university.  Since then, a new chapter of my life has been opened, in which I have experienced unprecedented limits of misery and tragedy – the least of which is witnessing death and fear on a daily basis.

I am writing, today, trying to tell the world how our life in Gaza can be seen in the eyes of a young person living this experience. It is worth mentioning, here, that this is my first attempt to write such an article.

The blockade of Gaza, imposed by Israeli occupation authorities and the Egyptian regime, is a suffocating siege that we, the youth of Gaza, have had nothing to do with. For more than a decade, this blockade has been affecting all aspects of our life.

It is an ongoing dilemma we face every day.  It is getting worse and worse every day, with no sign of hope. It creates hardships for every single resident, impacting every part of everyone’s life.

At the very first moment of my arrival in Gaza, the electricity cuts were the first shocking thing to witness. I had no choice but to change my lifestyle. Spending my childhood in a place where such power cuts are very rare, it felt really pathetic to see myself doing my homework and projects under the lights of simple candles.

At some point, some neighbors considered me to be lucky because of the generator my family had. However,  this apparent  ‘luxury’ is rendered useless when there is no available fuel to buy, or when backup batteries are drained. Soon, darkness becomes another dictator to dominate our life – stop studying; stop everything.

Things bother me. My mother is depriving herself of sleep; racing against time to exploit the few hours of electricity to complete as much of the accumulated household chores as possible. She sometimes gets up at dawn to wash clothes and do all the other tasks that require a source of power.

A refrigerator with food in it became a luxury of the past. We are now forced to buy our food on the spot!  Something that is not easy in a place like Gaza. 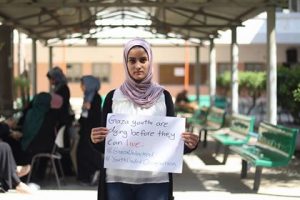 The electricity crisis has other negative impacts on the youth. Aside from hindering our studies, it also isolates us from the outside world and leaves us with deep feelings of boredom.

This suffering is doubled when we must endure Israel’s attacks, because then, we might have to survive without any electricity at all for two or three days, and sometimes for over a week!

It is difficult to convey exactly how the lack of electricity impacts our lives, so I ask you, the international community, this: “Can you imagine living your life with only four hours of electricity each day? Imagine yourself isolated from the rest of the world for over a week, terrified; expecting to die at any moment” — for this is how my life is.

The opportunity to pursue your studies abroad, and to benefit from scholarships, becomes impossible under this siege and the travel ban.

A friend of mine, who managed to be awarded a scholarship in Germany, told me that she could not get the permits she needed in order to travel. She lost her dream opportunity!  She is not alone: so many young students are banned from traveling abroad to pursue their education — there are tens of thousands of students waiting to study abroad.

Imagine this: My friend Jamal Jabir wishes to travel outside of Gaza just for simple things. “I really want to travel, not because the outside world is prettier than Gaza, but because I have exhausted the beauty here.” He went on: “I have never seen a lake or a river during my entire life. I have never seen a Bugatti, Lamborghini, or Ferrari, and I have never been on a train. I only see them in pictures on the internet. I really want to see what they look like in the real life.” Does this tell you anything? Just imagine that the ultimate dream of a teenager is not to own a Ferrari, but to see one driving around!

One of my fellow students, Mustafa Abu Batnain, once asked: “Does this world understand that I cannot visit another city in the same country? How could this happen in today’s world?” I have heard a lot about Europeans being able to move freely from one country to another without being stopped at any checkpoint! Could you imagine that … crossing borders to other countries without a checkpoint, while we cannot even go from one city to another!

Gaza is one of the most densely-populated regions on earth. It actually has a very small geographical area of just 17 square miles, which means there are 42,600 people squashed inside every square mile! Stuck! Why are Gazans denied their basic human rights to live, move, and travel? Why can’t they move freely whenever and wherever they want to, just like all other people in the world? 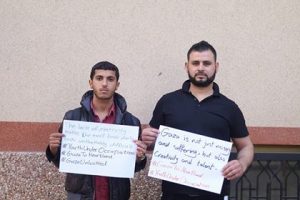 One of my friends has relatives in the West Bank. He has never met with them. Like all Palestinians with families in other parts of the occupied territories, he is forbidden by Israeli occupation authorities to meet his own relatives.

Unemployment here is over 40 per cent. Gaza has one of the highest rates in the world, while youth unemployment is over 60 per cent. Every time we are reminded of this information, the nightmare mantra returns: there is no future in Gaza; no work; no life for its young people. This suffocating siege dictates this day-to-day reality to us. We cannot plan for our lives. We only live a day at a time, with no plan for the future.

Nevertheless, my friend’s voice interrupts these bad and frustrating thoughts. He says: “Gaza is not just misery and suffering. It is also creativity and talent.”

This is true. I have encountered many talented youngsters from all over Gaza. Despite all the suffering and pain, hardships and troubles, obstacles and disappointments, they have never surrendered. Whatever hinders their way towards success and glory, they keep moving, motivated to reach their ultimate goals.

Youssef AlKrunz was a superb footballer. He participated in the recent peaceful protests of the Great Return March at the borders of Gaza and the occupied territories of 1948.  His future dream and possible career vanished when an Israeli sniper shot him in his foot which had to be amputated. Despite this, he shocked me by saying: “I will never lose hope!”

‘Gaza’ and ‘hope’ are two words that seem to be  disconnected. However, the young people here are trying to do what’s possible to make them go hand-in-hand. We, the youth of Gaza, are like all other people of the world. We have our own dreams and creative talents. We have the necessary skills to be good to our community and to the whole world.

I hear about people committing suicide around the world, but I am sure it rarely happens here. What is our secret? Is it hope? But what kind of hope do we have? Is it that kind which transforms into determination, and then, motivation, and then, resistance, and then, the Great Return March, and then Freedom. Is it?

Youssef Al-Bahtini is one of these youth; he wants to leave Gaza so that he can enter the Guinness Book of World Records as a contortionist. Israel’s blockade prevents his attempt from taking place. He never loses hope but keeps trying to find a way to achieve his dreams.

I, myself, established a youth club in June 2016. It works to help the young people of Gaza to practice English in order to speak out and tell the world about our struggle, suffer, and our just Palestinian Cause.

Mahmoud Ghanem, a friend and a coworker of mine in this club, is a fitness and Parkour trainer. He has been playing Parkour since 2007 even though there are no facilities for such a sport.

For practice, he usually goes to the cemeteries or to sites of destroyed houses. “I have always had a dream of playing Parkour in a room like the ones I can see in YouTube videos,” he says. “I dream of being able to play against some well-known Parkour players of the outside world.”

Nowadays, I am working with a team of young people, preparing to speak on behalf of Gaza’s youth, conveying our message: We, the young people of Gaza, have been suffering since the very beginning of our lives under this occupation.

We have never enjoyed freedom. However, because we love to live, we will never give up. We will do whatever is possible to disclose the Israeli apartheid, crimes, and lies, and false propaganda against us.  We will tell the world the truth about Gaza’s youth and our harsh and excruciating situation. We shall become Youth-With-Absolute-Freedom — not just Youth-Under-Occupation.