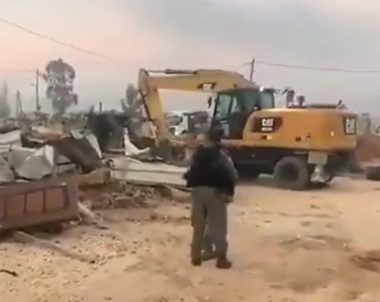 Israeli soldiers demolished, Tuesday, a Palestinian home in Beit Hanina neighborhood, north of occupied East Jerusalem, under the pretext of being built without a permit.

The owner of the demolished property, Nidal Shawamra, said the soldiers and personnel of the City Council, broke into his home and forced him, along with his family, out of the property, without allowing them to remove their furniture and belongings.

He added that the soldiers then demolished the property rendering the family, including his elderly mother, homeless.

Shawamra stated that he built the 120 square/meter property in the year 2018, on his own land, and added that Israel is claiming the land is “owned by Jewish settlers.”

It is worth mentioning that Israel has been issuing demolishing orders in the al-Ashqariyya area of Beit Hanina, and has also been denying construction permits to the Palestinians, amidst plans to pave a road and build new units for illegal colonialist settlers.

All of Israel’s colonies in the occupied West Bank, including those in and around occupied East Jerusalem, are illegal under International Law, the Fourth Geneva Convention in addition to various United Nations resolutions.