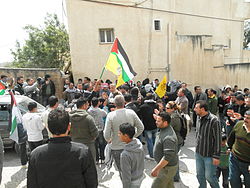 During the weekly non-violent protest in Kufur Qaddoum village, in the northern part of the West Bank, 13 year old Khalid Murad Ishteiwi was hit by a rubber coated steel bullet, which lodged in his thigh. He was rushed to the Rafidiya Hospital, where he is in stable condition.

The attack on the weekly protests follows a similar attack last week in which Israeli forces wounded a three-month old baby. The baby was reportedly among several Palestinians injured by Israeli forces suppressing the weekly peaceful anti-settlement procession, on Friday September 28th, 2018.

And the previous month, an international supporter from Norway was shot while at a protest in Kufur Qaddoum.

Morad Eshteiwi, the Coordinator of the Popular Committee Against the Wall and Settlements in Kufur Qaddoum, told reporters from the Ma’an News Agency that Israeli forces raided the village before Friday prayers, to suppress the weekly march that takes place every Friday after noon prayers, for the past ten years.

In addition to the wounding of 13-year old Khalid, another youth was wounded in the hand by a rubber-coated steel bullet.

During the attack, Israeli forces invaded Palestinian homes in Kufur Qaddoum and occupied rooftops. There, they fired tear gas grenades and rubber-coated steel bullets into the village. Tear gas entered homes and yards, causing many residents to suffer from tear gas inhalation.

According to the Ma’an News Agency, the speaker for the Omar Bin al-Khattab Mosque in Kufur Qaddoum, Sheikh Abed al-Razzaq Amer, was abducted by Israeli forces along with his son Usayd.

The two were on their way to Friday prayers when their vehicle was seized and they were abducted.

The Israeli soldiers then used their vehicle to hide behind when Palestinian youth threw stones at them. This caused some dents to the vehicle.

Residents of Kafr Qaddoum began staging weekly protests in 2011, against Israeli land confiscations, as well as the closure of the village’s southern road by Israeli forces. The road, which has been closed for 14 years, is the main route to the nearby city of Nablus, the nearest economic center.

The army blocked off the road after expanding the illegal Israeli settlement of Kedumim, in 2003, forcing village residents to take a bypass road in order to travel to Nablus, which has extended the travel time to Nablus from 15 minutes to 40 minutes, according to Israeli rights group B’Tselem.

Addameer, a Prisoner Support and Human Rights Association, said that “Before 2003, the residents of Kafr Qaddoum would use a shorter road to the east in order to come and go to nearby cities and villages.”

Addameer added, “The only alternative road is roughly six times longer than the previous route, disrupting the villagers’ ability to attend university, jobs, and other vital aspects of their economic and social well-being.”