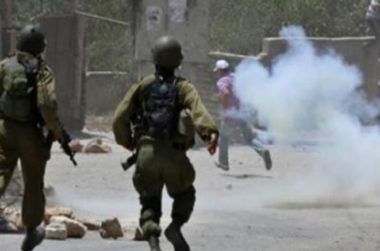 Israeli soldiers shot, Friday, five Palestinians in the al-Lubban ash-Sharqiya village, south of Nablus, in the northern part of the occupied West Bank.

They added that the soldiers shot three Palestinians with rubber-coated steel bullets, and three who were directly hit with gas bombs, while many others suffered the effects of teargas inhalation.

In addition, the soldiers closed the main entrance of the village, invaded and searched many homes before occupying their rooftops, and attempted to abduct local protesters after ambushing them.