13 Years of Illegal Closure with Impunity 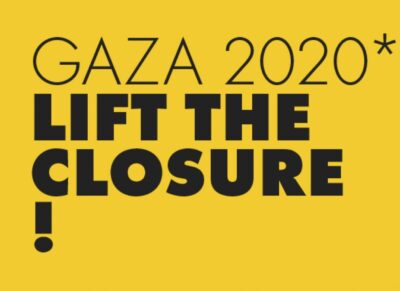 On Wednesday, 15 July 2020, Palestinian, regional, and international civil society organisations, including Al-Haq, Al Mezan Center for Human Rights, Adalah, the Cairo Institute for Human Rights Studies (CIHRS), Medical Aid for Palestinians (MAP), and the Palestinian Center for Human Rights organized a webinar titled “Collective Punishment in Gaza: 13 Years of Illegal Closure with Impunity,” in parallel to the 44th Regular Session of the United Nations (UN) Human Rights Council and following the release of the report of the UN Special Rapporteur on the situation of human rights in the Palestinian Territory occupied since 1967, Professor Michael Lynk, on collective punishment under agenda Item 7 of the Council. The webinar follows the launch of the Gaza 2020: Lift the Closure campaign in June 2020 by civil society organisations and highlights the urgent need to lift Israel’s illegal closure.

The webinar, organized by Al-Haq, was moderated by Elizabeth Rghebi, the Levant Researcher at CIHRS. In her opening remarks, Ms. Rghebi recalled that June 2020 marked 13 years of closure of the Gaza Strip, which amounts to unlawful collective punishment over two million Palestinians, a situation which the UN said would become unliveable by 2020.

Over the last 13 years, Palestinians in Gaza have endured severe restrictions on their freedom of movement, devastating destruction of property and infrastructure, an overburdened and collapsing healthcare sector, and a man-made humanitarian crisis.

Now, the COVID-19 pandemic has brought new and unprecedented challenges for the Palestinian people in the Gaza Strip, which is one of the most populated areas on Earth and where more than 96 percent of water is unfit for human consumption.

During the webinar, Professor Shane Darcy, Deputy Director of the Irish Centre for Human Rights in the School of Law at the National University of Ireland Galway, presented on the legal history and framework of the prohibition on collective punishment under international humanitarian law, international human rights law, and international criminal law.

He highlighted Israel’s decades-long use of illegal collective punishment, in violation of Article 33 of the Fourth Geneva Convention, and reaffirmed Professor Lynk’s finding that: “Collective punishment is an inflamed scar that runs across the entire 53-year-old Israeli occupation of Palestine.”

In his presentation, Professor Darcy focused on house demolitions as a form of illegal collective punishment against Palestinians. He stressed that the underlying punitive measures imposed by the Israeli occupying authorities, including extensive destruction of property, may amount to war crimes and crimes against humanity under the Rome Statute of the International Criminal Court.

Nuriya Oswald, the International Legal and Advocacy Director at Al Mezan, explained how 13 years of illegal Israeli closure have severely denied Palestinians in Gaza the exercise of their individual and collective rights, including their right to self-determination.

She highlighted the impact of the Gaza closure and Israeli de-development policies, which have resulted in profound levels of poverty, food insecurity, unemployment, and aid dependency, which compound the susceptibility of Palestinians to COVID-19.

Mrs Oswald highlighted the recent increase in suicide cases in Gaza, with 16 documented cases since the start of the year, as a testament to the desperation and severe mental health impacts of the closure.

She added that the fishing and agriculture sectors, once thriving industries in Gaza, are now two of the most vulnerable due to Israeli military assaults on Palestinians and their livelihoods and that the Israeli occupying forces killed 217 Palestinians and wounded over 14,500 during the Great Return March demonstrations in Gaza.

The demonstrations called for the illegal closure of Gaza to be lifted and for the realization of Palestinians’ rights, including their right of return.

Neil Sammonds, MAP’s Advocacy and Campaigns Director, discussed Israel’s repeated attacks on health workers and healthcare in the occupied Gaza Strip. He highlighted the killing and injury of medical workers by the Israeli occupying forces during the Great Return March demonstrations and recalled that Gaza’s healthcare system has been brought to a collapse due to Israel’s 13-year closure.

Mr Sammonds recalled that health workers are largely prevented from leaving Gaza to receive training and development opportunities elsewhere, adding that resources and medical equipment are lacking in the Gaza Strip and that Palestinian patients must increasingly seek treatment outside Gaza. Through Israel’s arbitrary permit regime, the occupying authorities frequently deny or delay permit applications by patients and their companions, thereby undermining the right of Palestinians in Gaza to access the healthcare they need.

She highlighted the complicity of Israel’s legislature and court system, including the Supreme Court, and their role in shielding Israeli perpetrators from accountability and enabling policies of collective punishment against Palestinians.

She stressed that the Gaza closure is a result of Israeli impunity and concluded that the Israeli domestic system, in all its aspects, is unwilling to genuinely take action against its soldiers, commanders, and officials for suspected crimes committed against Palestinians. Accordingly, she called for international accountability to be pursued at the International Criminal Court.

In her presentation, Rania Muhareb, Al-Haq’s Legal Researcher and Advocacy Officer, recalled that the Palestinian people have suffered a long history of collective punishment since 1948, which must be understood within Israel’s broader regime of settler-colonialism and apartheid over the Palestinian people.

She recalled that the Gaza closure policy, which is unprecedented in its duration and severity, has completely separated, isolated, and fragmented Palestinians in Gaza from the rest of the Palestinian people and the outside world.

This entrenches Israel’s strategic fragmentation of the Palestinian people, denying them the exercise of their inalienable rights to self-determination and return.

In December 2019, the UN Committee on the Elimination of Racial Discrimination (CERD) found that the Gaza closure and blockade constitute policies of racial segregation and apartheid. She concluded that it is time for States to adopt effective measures to address the root causes of Palestinian oppression, to recognise Israeli apartheid, and to lift the Gaza closure as a step toward overcoming Israel’s apartheid regime. This must start with international justice and accountability and an end to Israeli impunity.

In his report, Professor Lynk examined the human rights situation in the occupied Palestinian territory with an emphasis on different forms of collective punishment, including the illegal closure of the Gaza Strip.

The UN has repeatedly warned that Gaza would become uninhabitable by 2020 should Israel fail to lift its illegal closure. In February 2019, the UN Commission of Inquiry on the 2018 protests in the occupied Palestinian territory recommended that Israel, the Occupying Power, “lift the blockade on Gaza with immediate effect.” Over a year since, Israeli impunity has continued to prevail. It is time to lift the closure.

Watch our joint webinars on collective punishment at the margins of the 44th Regular Human Rights Council Session: