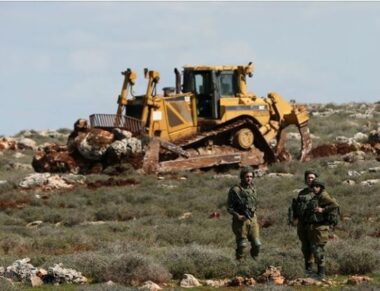 As Israeli soldiers continued the uprooting and destruction of Palestinian trees owned by the villagers of Kisan, east of Bethlehem, south of occupied Jerusalem in the West Bank, Israeli colonists starting installing mobile homes in the area to prepare for a new illegal outpost.

Hasan Breijiyya, the head of the Bethlehem office of the Wall and Colonization Resistance Commission, stated that the colonists installed several mobile homes, and started preparing infrastructure for their new illegal outpost.

Breijiyya added that Israel is preparing for expanding the Ibei HaNahal colony, which was built on illegally confiscated privately-owned Palestinian lands.

Ibei HaNahal is part of the Gush Etzion colonialism block, south of Bethlehem and northern of Hebron.

It is worth mentioning that Kisan village is inhabited by around 800 Palestinians, and already lost half of its lands (2 kilometers) to Israel’s illegal colonies.