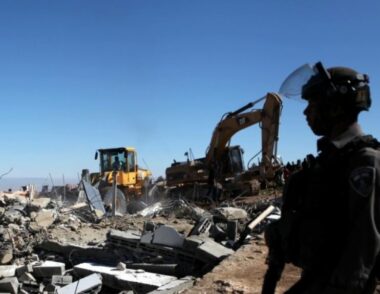 Israeli soldiers demolished, Monday, a Palestinian home in the al-Khader town, south of Bethlehem, south of occupied Jerusalem in the West Bank.

Hasan Breijiyya, the head of the Bethlehem office of the Wall and Colonization Resistance Commission, stated that several army jeeps and bulldozers invaded the Shoshahla area, south of the town, and surrounded the home of Mohammad Mustafa Abu Ammouss.

Breijiyya added that the soldiers then stormed the home, forced the Palestinian and his family out of their property, and demolished it.

The Israeli army claims the home was built without a permit from the so-called “Civil Administration Office,” the administrative branch of Israel’s illegal military occupation of Palestine.

It is worth mentioning that the property was rebuilt after the soldiers demolished it for the first time in the year 2002.

Shoshahla area is subject to frequent Israeli violations, including the demolition of many homes and structures, in addition to current orders targeting many other buildings, due to constant Israeli attempts to build and expand its illegal colonies in that area.