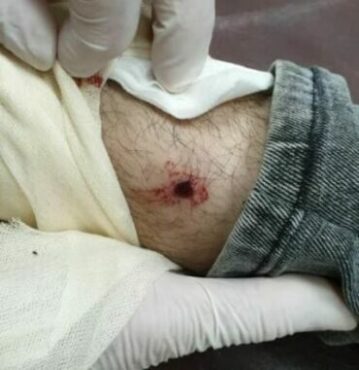 Dozens of Israeli soldiers invaded, Monday, the al-Jalazoun refugee camp, north of the central West Bank city of Ramallah before abducting a Palestinian teen, in addition to shooting a young man and searching many homes.

Local sources in the refugee camp said the soldiers stormed and ransacked dozens of homes and interrogated many Palestinians.

They added that the soldiers also occupied several rooftops to use them as firing posts at Palestinian youngsters who protested the invasion.

Medical sources said the soldiers shot a young man with a live round in the leg, before he was rushed to Palestine Medical Complex in Ramallah. The soldiers also abducted a teen, identified as Hussein Yasser al-Ishawi, 17, and took him to an unknown destination.