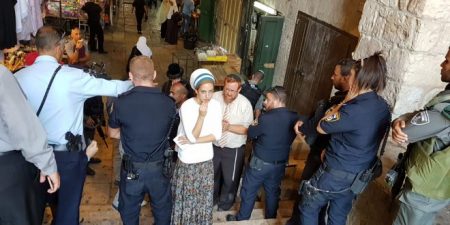 Dozens of extremist Israeli settlers stormed the courtyards of Al-Aqsa Mosque, under protection of Israeli police, on Wednesday morning.

In the early hours of the morning, when the Magharaba gate was opened, Israeli occupation forces deployed in the courtyards of the mosque, to protect the extremists’ intrusion, Al Ray reports.

Ultra-Orthodox Rabbi Yehuda Glick performed Talmudic rituals in front of the Qatanin Gate, also under protection  by Israeli occupation forces, according to the PNN.

The media official in the Islamic Endowments Department, Firas al-Debs, said that 136 settlers stormed the mosque, during the morning period, and wandered in the courtyard amid receiving explanations about the alleged ” 3rd Temple”.

Israeli forces tightened procedures at the gates of the mosque, checked the identity cards of Palestinians coming to the mosque and detained some of them at the entrance.