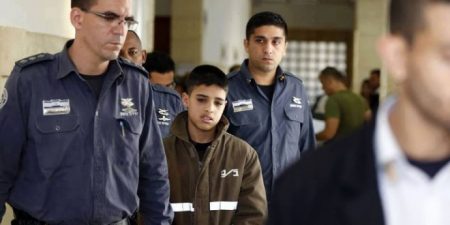 An Israeli court in Jerusalem, on Monday, sentenced 14-year-old Ahmad Manasra to 12 years of prison, under conviction of attempted stabbing.

Ahmad, on 12 October, 2015, was shot and tortured on camera by an Israeli settler, while his cousin, Hassan Manasra, was killed on the spot, for allegedly stabbing settlers in Pisgat Ze’ev settlement, Jerusalem.

Ahmad’s lawyer, Tareq Barghouth, said that the court also imposed a financial compensation of 180,000 shekels, according to the PNN.

An international uproar was caused around the case, with regard to the torture and videos later, as the boy was shown being abused by Israeli investigators.

Ahmad stayed in the hospital before he was taken to prison.