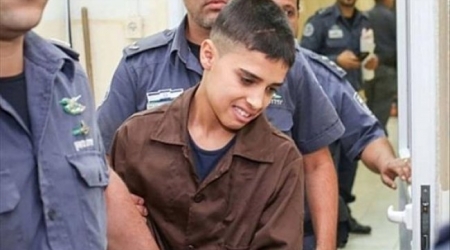 A Palestinian child, Ahmad Manasra, 14, was convicted Tuesday of two counts of attempted murder, despite a lack of evidence, a video showing him being severely beaten and insulted by a crowd shouting racial slurs, and video showing Israeli interrogators brutalizing and intimidating the crying child with no family member or lawyer present.

Manasra was 13 at the time of his arrest, and the Israeli court decided to allow the prosecution’s request to delay his court hearing until January, when he turned 14 and was allowed, under Israeli law, to be tried as an adult. The Israeli Knesset used Manasra’s case as an example when they voted several months ago to change the age at which a Palestinian child can be tried as an adult from 14 to 12.

Israeli children, in contrast, are considered ‘minors’ until the age of 18.

Manasra’s lawyer, Lea Tsemel, said the ruling Tuesday was “surprising, unbalanced and problematic.” During sentencing, Manasra will face a likely sentence of 20 years to life in prison.

The child in this case, Ahmad Manasra, was severely beaten, hit by a car, and repeatedly kicked and punched in the head by an angry Israeli mob who believed that he had participated in a stabbing in which a 13-year old Israeli boy was wounded.

However, Manasra and his lawyers contend that he had nothing to do with the stabbing, which was carried out by Manasra’s 15-year old cousin, who was killed at the scene of the attack.

A video posted online shows a group of men attacking Manasra, cursing and using anti-Arab epithets against the boy.

An average of 700 Palestinian children are abducted by Israeli forces each year. Human rights groups have pointed out that over 90% of these children are subjected to brutal interrogation by Israeli officers with no family members or lawyer present.

In 2013, an Israeli government investigation looked at the disparate treatment between Palestinian and Israeli children accused of a crime. The Israeli paper Yedioth Ahranot reported in 2014, “The gap between the treatment of Israeli minors and minors living in the territories has to date led to endless international complaints, and numerous reports by the Association for Civil Rights in Israel. Israel responded to the criticism by establishing a year ago a committee headed by Raz Nazari, the deputy attorney general for the criminal division, who was tasked with exploring the possibility of finally establishing a special military tribunal for Palestinian youths in the territories.”

According to Yedioth Ahranoth, the investigation found discriminatory practices against Palestinian minors at every stage of their cases: from arrest, to interrogation, to assignment of lawyers, to family members being present, to hearings, to court rules, trials and sentences.