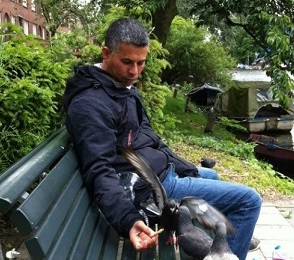 The nominees are from Palestine, Azerbaijan, Burma/Myanmar, Colombia, Honduras and Tanzania.

The award is given annually for human rights defender who, through their nonviolent work and courage, make an outstanding promotion, and protection of the human rights of their communities, often at great personal risk.

Mohammad Khatib is a member of the Popular Committee against the Wall in Bil’in village, and is the first Palestinian to be nominated to this award, and reaches the final stage for the Middle East region this year.

Talking to FM24 Radio in Ramallah, Khatib said that this nomination is a great personal honor, and an honor to every person who participated in the popular, nonviolent resistance against Israel’s illegal colonies and its Annexation Wall in the West Bank.

“Being a nominee, who was initially nominated by the Coordination Committee of the Popular Committee against the Wall, is an international recognition of the legitimate right of our people to resist this occupation and its illegal colonies,” Khatib said. — Mr. Mohammed Khatib is a human rights defender working on the right to self-determination in the Occupied Palestinian Territories. He is Palestinian lawyer and one of the founders of the Popular Struggle Coordination Committee (PSCC), which connects peaceful protests in different villages across Palestine.

In his 11 years as a human rights defender, he has been targeted with harassment, detentions and abuse by the Israeli military, and physical assault by Israeli settlers.

He has been one of the leaders of protests in his village of Bil’in, in the West Bank, which have been held every week since 2005, and which helped pressure the Israeli Supreme Court to order the re-routing of the Wall it has constructed around the village.