Janazra: “Suspension Of My Strike Is Temporary, Awaiting Interrogation” 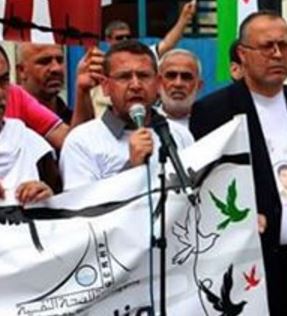 The Palestinian Prisoners’ Society (PPS) has reported, on Wednesday evening, on behalf of detainee Sami Janazra that he has temporarily suspended his hunger strike, for seven days, awaiting interrogation outcome, and that he will only be on a liquid diet during this period.

Janazra told a PPS lawyer that the suspension of the strike is only for seven days, and came after an Israeli court granted the prosecutor’s office seven days, after the it alleged obtaining new information that could allow it to press charges against him.

Janazra stated he will not be eating any solid food, and that he made the decision following the court session, which was held on Tuesday, and added that he would resume his strike should Israel decide to keep him held under arbitrary Administrative Detention orders, without charges.

Janazra, 43, from the al-Fawwar refugee camp, in the southern West Bank district of Hebron, went on hunger strike 69 days ago, and suspended it, on Wednesday morning.