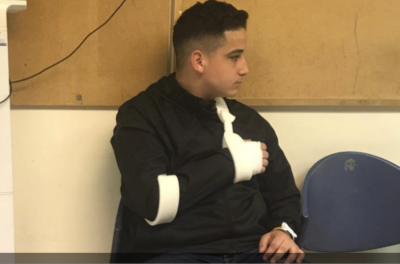 In the al-Isawiyya area of Jerusalem on Tuesday, Israeli forces fired a rubber-coated steel bullet into a schoolyard, injuring 15-year-old student Mohammad Awni Atiya in his hand.

The incident took place at the “Boys Secondary School”, in the village of Al-‘Isawiya.

The Silwan Information Center reported that the Israeli Special Forces stormed Al-Madares Street in the village, in conjunction with the school’s break between the classes.

While students were buying from the vendors through the main school gate as usual, the soldiers got off their vehicle and walked parallel to the main gate.

Abu Al-Hummos added that the occupation forces attacked the school gates and pointed their weapons towards the students through the gates’ separators and fired rubber bullets without regard for the crowded courtyards, where the student Atiya was injured; he was immediately transferred for treatment.

The parents’ committee in al-‘Isawiya denounced the disregard for the lives of students and the failure to provide them with a safe environment even when they are inside their schools, not to mention the storming and deployment in Al-Madares Street in the morning and afternoon time.

The committee said: “The school yard was full of students, and the occupation’s claim that boys were throwing stones at the forces passing by in the area does not give them the justification for endangering the lives of all students,” noting that about 300 students study in the high school aged between 15-18 years.

The committee indicated that the 8-year old boy Malik Wael Issa was injured after the end of his school day while he was on his way to his home in the village last month, which led to the loss of his eye. The forces also raided the same school last November, and assaulted the administrative and educational staff and arrested a student, not to mention the daily provocations of students while going to their schools or returning to their homes.