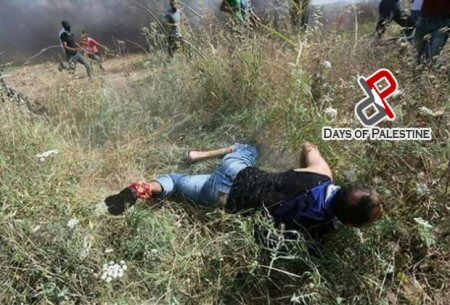 Hundreds of Palestinians took to the streets, in both the occupied West Bank and the Gaza Strip, in solidarity with about 1,600 Palestinian hunger strikers inside Israeli jails. (Some sources report 1,800; it is difficult to obtain a precise count, due to the isolation of detainees by the Israeli Prison Service, the absence of lawyers, transfers to other units, etc.)

Eyewitnesses, along with medical sources, said that forces dealt violently with the protesters, beating them and opening fire on them with both live ammo and rubber-coated metal bullets.

The Palestinian Red Crescent (PRC) announced, at the end of the day, that the total number of the Palestinians wounded during the crackdown on the protesters was 164.

According to the PRC, seven Palestinians suffered moderate to critical injuries, including five in the occupied West Bank and two in the Gaza Strip.

It also said, according to Days of Palestine, that dozens were wounded with rubber-coated metal bullets, in different parts of their bodies, but most sustained “light” injuries.

Regarding the rest of the wounded, the PRC said that they suffered breathing problems due to the heavy amounts of Israeli tear gas thrown at them.