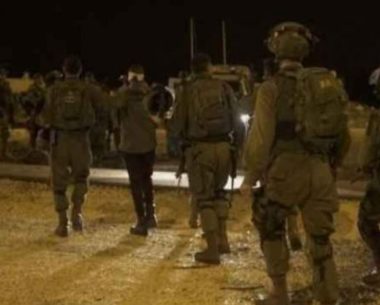 The Israeli military abducted 21 Palestinians from various parts of the West Bank on Monday, 15 of them from the Ramallah governorate, in the central West Bank.

The Israeli occupation forces also abducted Mahmoud Hassan Odeh for Dadwa, Mohammed Issa Al-Ali from the Western Farm, Hussein Shabana from Singel to the north, Montaser Qadah from Shuqba to the west, and Yaqoub Thalji Al-Rimawi and Hamam Munir Al-Rimawi from Beit Rima town to the north of Ramallah.

Clashes erupted in the town of Beit Rima between the Israeli soldiers and a number of young men after the incursion.

During the clashes, the occupation fired sound bombs and gas, but no injuries were reported.

Israeli occupation forces also abducted on Monday a citizen from the town of Dura, south of Hebron.

According to the Wafa news agency, Israeli occupation forces raided the town and abducted Jihad Yousef Ali Faqousa, after searching his house and tampering with its contents.

They also raided several neighborhoods in the city and the towns of Deir Samet and Beit ‘Awwa.

According to eyewitnesses, members of the special forces kidnapped the following youth in two vehicles: Shawkat Khader al-Sheikh (16 years), Amir Shishtawi and Mahmoud Erekat, after they raided Yasser Arafat Square in the center of the town.

According to local sources, a large force of the Israeli army stormed the houses of Beit Ta’mar, and launched a large-scale raid on a number of houses belonging to: Jamal Abu Muhaimid, Adnan Ali Mubarak, Hashim Abu Muhaimid, Amir Hassan Abu Muhaimid, and ransacked their property, without abducting any of the residents of the homes.