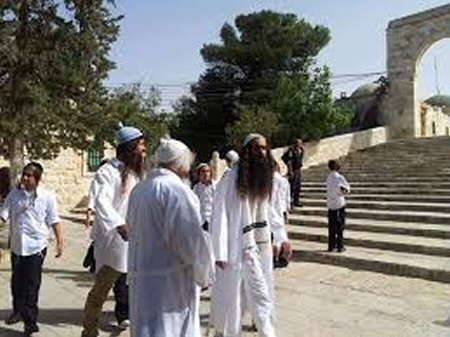 The incursions coincide with Jewish calls to intensify the daily raids on the mosque and to establish a full program during Sunday, Monday and Tuesday, inside and outside the compound.

The official of public relations and media department of Islamic endowments, Firas Aldebs, stated that 192 extremists stormed the Al-Aqsa Mosque since the morning, and after the opening of the door of Al-Maghariba.

Settlers organized provocative tours in various areas of the courtyards and received explanations about the alleged Temple Mount and its landmarks during the intrusion.

Israeli occupation police tightened security measures at the gates of the mosque and checked the personal identities of the worshipers coming to it.

In the meantime, dozens of worshipers from Jerusalem and the occupied Palestinian territories have come to Al-Aqsa, since the early morning, attending in study seminars and reading the Koran, while chanting slogans to protest against the continuous Israeli intrusions.

The so-called “Back to the Mountain” extremist group within the union of the “Temple” organizations, headed by extremist Rafael Morris, called for a full program on Monday and Tuesday, inside and outside the mosque, where they will daily storm into Al-Aqsa from 7:30 am, with a full morning program in Al-Aqsa on Tuesday.

Hebrew sources confirmed that Israeli occupation forces stationed at the gates of Al-Aqsa have a list of names and photos of wanted individuals, on the pretext of posing a confrontation to the occupation.