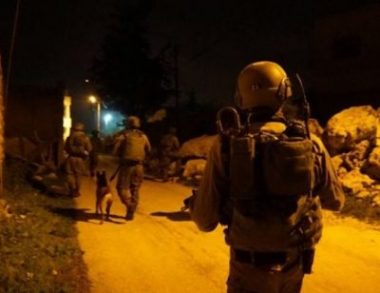 Israeli soldiers invaded, on Tuesday at dawn, the town of al-Khader, south of the West Bank city of Bethlehem, searched homes and abducted three Palestinians. The soldiers also invaded Nahhalin village, west of Bethlehem, and summoned one Palestinian for interrogation.

The three were cuffed and blindfolded, before the soldiers took them to Etzion military base, south of Bethlehem,

Furthermore, the soldiers invaded Nahhalin village, and summoned Hasan Mohammad Najajra, 23, for interrogation in Etzion, after searching his home.