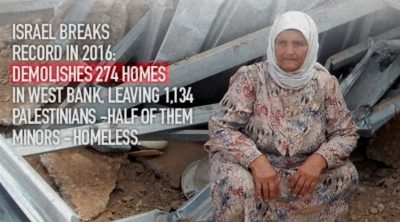 Report By B’Tselem – The Israeli Information Center for Human Rights in the Occupied Territories — 2016 saw a marked increase in the number of homes Israeli authorities demolished throughout the West Bank, including East Jerusalem, citing lack of building permits as a pretext. The scale of demolitions documented by B’Tselem this year is the most extensive since we began systematically documenting demolitions in 2004.

In August 2015, Israeli authorities waged an unprecedented demolition campaign across the West Bank, destroying some 100 structures, half of them residential, which were home to over 200 people, including roughly 100 minors. The wave of demolitions, considered at the time as unusually extensive, was unofficially halted in late 2015 due to the Jewish and Muslim holidays.

Authorities resumed the demolitions in early 2016. As the months went by, what had seemed in late 2015 as exceptionally extensive demolitions became the norm and part of official Israeli policy throughout Area C.

As part of this policy, in 2016, Israel demolished 274 homes in the West Bank (excluding East Jerusalem), thereby rendering homeless 1,134 individuals, including 591 minors. The extent of devastation Israel wreaked in 2016 outstripped the number of homes it demolished in 2014 and 2015 combined.

Efforts to drive dozens of small shepherding and farming communities out of Area C are particularly palpable in these areas. In the Maale Adumim area, which includes land that Israel refers to as Area E1, authorities demolished 49 dwellings; 224 people, including 115 minors, were rendered homeless. Israeli authorities continued their discriminatory policies against East Jerusalem’s Palestinian residents as part of an overall policy designed to cause Palestinians to leave the city.

Their actions are also part of efforts to achieve a demographic and geographic reality that would frustrate any future attempt to question Israeli sovereignty in East Jerusalem. In 2016, Israeli authorities demolished 73 homes in East Jerusalem. Fifteen others were demolished by their owners after receiving demolition orders from the municipality.

They demolished their own homes in order to avoid being charged by the municipality for the cost of the demolition and hefty municipal fines. All told, authorities rendered homeless 295 people, including 160 minors.

To sum up, despite the differences between Area C and East Jerusalem in terms of which authorities operate in each area and the laws applied by Israel, the policy Israel pursues in the two areas is similar, and designed to minimize the number of Palestinians in as much land as possible.

This number not only falls far short of meeting the needs of the population, inquiries by Bimkom revealed that the Civil Administration neglected to mention that virtually all the permits (35 permits) were issued at its own request for lots in the al-Jabal West site, where the Civil Administration plans to forcibly move Bedouin communities currently living east of Maale Adumim.

This means the number of construction permits in Area C issued in response to applications by Palestinians is practically non-existent.

Israel pursues this demolition policy while willfully ignoring the reality it creates for Palestinian residents, treating this reality as if state authorities bear no responsibility for it having come about. With no avenue available to them to build legally, Palestinians are left with no choice but to build their homes without permits, and then live in constant fear of losing them and their sources of livelihood to demolition.

The state is forcing tens of thousands of people to live in inhuman conditions, without basic living conditions and with no hope or possibility of bettering their situation. This policy, implemented on the ground for years, is unlawful and immoral.

This policy, which all authorities work to uphold, severely and directly violates the most fundamental human rights of tens of thousands of Palestinians, and indirectly those of hundreds of thousands more.

At the same time, the policy also offers decisive evidence that Israel has long-term plans to continue controlling the area, while oppressing and dispossessing its residents.