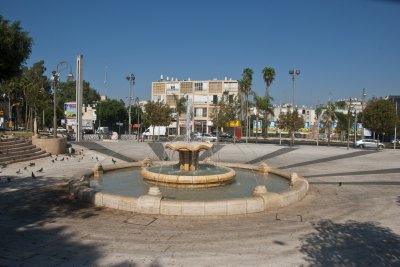 On Monday morning a Palestinian man was chased down and beaten by passers-by after allegedly stabbing and wounding a Palestinian with Israeli citizenship at a shawarma shop in Petah Tikva. The attacker apparently mistook the victim for a Jewish Israeli, according to Israeli media sources.

The Palestinian-Israeli man who was injured is a 32-year old bus driver with the Israeli bus company Egged. He was allegedly stabbed in the chest and mildly wounded, and was seated in a chair in the restaurant when medics arrived to take him to the Beilinson Hospital.

Israeli sources reported that the young man who carried out the stabbing shouted, “I did it for al-Aqsa”, in reference to the conflict that has been taking place at the al-Aqsa Mosque in Jerusalem over the past week, since the Israeli government increased security measures at the holy site.

An employee at the pizzeria next to the shawarma shop claimed to have hit the 21-year old with a pan, but that the young man kept going until a motorist drove over the pavement and hit a garbage can that knocked down the unnamed assailant.

Israeli police arrived on the scene and arrested the Palestinian, taking him to an interrogation center.