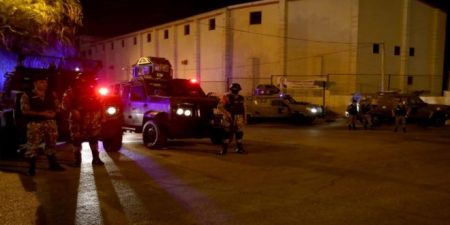 A 17-year old teen who was supposed to be delivering furniture to the Israeli Consulate in Amman, Jordan was shot and killed by an Israeli military guard stationed outside, after he allegedly tried to stab the guard with a screwdriver. The child’s parents say that the dispute was about the price of the furniture he was delivering, and that he hadn’t tried to stab anyone.

The incident took place at a privately-owned building rented by the Israeli government as a residence for some of its consular employees. A second Jordanian shot and killed by the Israeli guard was identified by local sources as the owner of the building.

After the Israeli guard shot and killed the teenager and the building owner, the Israeli government rushed him and the rest of their consular staff out of the country, sparking the biggest diplomatic crisis between Jordan and Israel in years.

The teenager who was killed was identified by local media as Mohammed Zakaria al-Jawawdeh, a 17-year-old carpenter. The Israeli guard was injured, according to Israeli sources – but it’s not clear how the guard was injured.

Two Jordanians were shot dead after a worker stabbed an Israeli security guard with a screwdriver, at the Israeli embassy in Amman, Sunday night, causing him light injuries.

PNN sources said that the security guard responded to the stabbing by shooting the workman dead. In the course of the incident, the landlord was also wounded and, later, died of his injuries.

The incident comes in synchronization with escalations in the West Bank and occupied Jerusalem, after Israel installed electric gates around the Al-Aqsa mosque, where two Israeli policemen were killed at the site by gunmen for the provocative settler visits to the mosque.

Al-Aqsa mosque is considered the third holiest place in Islam, monitoring the movement into and out of the mosque. Israelis consider the same site their holiest, where the ancient Temple of Solomon is said to have once stood.

Palestinians have shown strong disagreement to the motion, and responded by ongoing demonstrations and violent response from the Israeli forces and settlers, where five Palestinians have been killed with live ammunition and attacked by teargas. The PA also cut all contact with Israel, following the move.

On Friday, three Israeli settlers were killed by a Palestinian in Halamish settlement, north of Ramallah, and Israeli PM Netanyahu announced that his home will be demolished.