Israel Is Not As Christian-Friendly As You Think 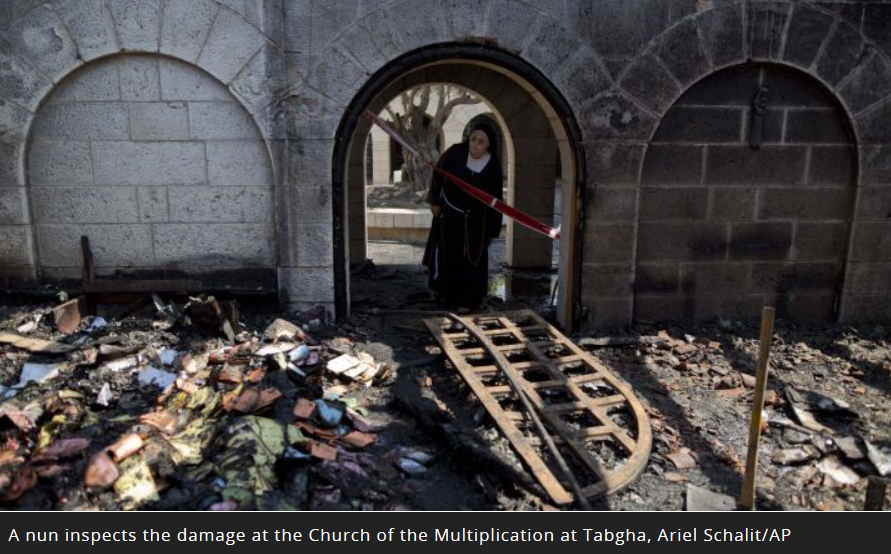 By Kathryn Shihadah,¬†If Americans Knew – The New Testament records that Jesus Christ took two loaves of bread and five fish, and fed five thousand people. Ancient believers identified the place where they believe this miracle happened and built a church on the site.

Today the Church of the Multiplication of the Loaves and Fishes stands in Israel, its 5th century mosaic floors still intact. Outside is a large rock where, legend has it, Jesus placed the bread before he distributed it to the crowd.

Since the newest shrine was built in 1984, the site has attracted thousands of pilgrims every day‚ÄĒexcept for an eight-month period in 2015-16, when it was closed for renovation after two Israeli settlers, Yinon Reuveni and Yehuda Asraf, vandalized and set it on fire. On July 3rd, Reuveni was found guilty¬†of arson.

Many American Christians were surprised when the vandalism story broke, and figured it was a fluke. After all, Christians and Jews share a common history. Christians, like Jews, revere the Old Testament, so there is a certain implied kinship. And most Christians assume that Israel is a friend of Christianity. The attack must have been some random act by a rogue, probably deranged, Israeli. How else to explain an act of arson perpetrated against a sacred site like the Church of the Multiplication?

Israeli President Reuven Rivlin and Prime Minister Benjamin Netanyahu were quick to weigh in. Rivlin asserted, ‚ÄúI was shocked and saddened to learn this morning of the fire at the church‚Ä¶Such terrible desecration of an ancient and holy place of prayer is an attack on the very fabric of life in our country ‚Äď where people of different faiths seek to live together in harmony and mutual tolerance and respect.‚ÄĚ He continued, ‚ÄúThe torching of the church is shocking and directly threatens the democratic nature of Israel.‚ÄĚ

Prime Minister Netanyahu echoed Rivlin‚Äôs sentiment: ‚ÄúThe shocking arson of the church is an attack on all of us. Israel‚Äôs freedom of religion is a cornerstone of our values and it is anchored in the law.‚ÄĚ (Much could be said about these ‚Äúdemocratic nature‚ÄĚ and ‚Äúfreedom of religion‚ÄĚ statements, but that will have to wait for another day.)

As ‚Äúshocked‚ÄĚ and ‚Äúsaddened‚ÄĚ as Israel‚Äôs heads of state claim to be, church vandalism by Jewish settlers in the Holy Land is actually all too common, and has been an issue¬†for years. The 1980s saw a spate of church desecrations, including the burning down of the Baptist church in Jerusalem.

Donald Neff, former¬†Time Magazine Jerusalem¬†bureau chief and author of five books on Israel-Palestine,¬†reported on a number of Zionist attacks during the 1948 war, according to Alison Weir‚Äôs Against Our Better Judgment. He quoted one Catholic priest, ‚ÄúJewish soldiers broke down the doors of my church and robbed many precious and sacred objects. Then they threw the statues of Christ down into a nearby garden.‚ÄĚ Christian leaders described in detail attacks on Christian sites, killing and injuring hundreds, including children, clergy, and refugees‚ÄĒall in spite of the fact that Jewish leaders had promised to preserve religious buildings.

For several decades, the attacks on religious sites quieted, then the 1980s saw a spate of church desecrations, including the burning down of the Baptist church in Jerusalem.¬†In 2008 an Israeli mayor ordered that New Testaments in the town be gathered up, dumped them into a pile, then burned them.

Starting in 2008 and growing exponentially in 2011, Palestinians were victims of a new wave of crime: ‚Äúprice tag‚ÄĚ attacks, a form of retribution by settlers against non-Jews whenever an illegal outpost was dismantled or a settler was attacked. Today, Palestinians (and sometimes even the Israeli government¬†‚Äúpay the price‚ÄĚ following any actions that are deemed not in settlers‚Äô interests. (It is important to note that settlements are illegal by international law, and no country in the world recognizes¬†their legitimacy.) Hundreds of such attacks have taken place, including graffiti like ‚ÄúJesus is garbage,‚ÄĚ ‚ÄúJesus is a monkey,‚ÄĚ ‚ÄúJesus is dead,‚ÄĚ ‚ÄúDeath to Arabs,‚ÄĚ ‚ÄúDeath to Christians,‚ÄĚ and ‚ÄúMary is a prostitute.‚ÄĚ

Christians (as well as Muslims) in Israel and Palestine have been subject to milder forms of state-sponsored persecution through discriminatory laws¬†for decades. Since 1993 Israel has required Palestinians, in what the American Friends Service Committee describes as a ‚Äúdraconian system of movement controls [that] has become increasingly institutionalized and restrictive,‚ÄĚ to obtain a military permit to visit their holy sites, including the Church of the Holy Sepulchre¬†and the Noble Sanctuary mosque complex, in Jerusalem‚Äôs Old City. This permit is almost impossible to procure, and effectively restricts millions of Christians‚Äô and Muslims‚Äô freedom of movement and worship.

In addition, the US State Department reported¬†that Israel has issued fewer and fewer residency or work permits to Christian clergy and other religious workers in recent years; clergy travel has become complicated, disruptive, and expensive; to Gaza it is essentially impossible. This is in addition to the demeaning Orthodox Jewish practice of cursing and spitting¬†at Christian clergy in the streets of Jerusalem that has been for years ‚Äúa matter of routine.‚ÄĚ

During the uptick in Jewish hate crimes before the 2014 visit of Pope Francis, Israeli police visited the Franciscan Order in Jerusalem and demanded that they take down their welcome sign. Church officials were surprised that the police were preoccupied with a sign carrying a positive message, instead of pursuing ‚Äúthe extremists who paint hate slogans on mosques and churches.‚ÄĚ

Israel also has a reputation for discrimination in the area of crime-solving. A U.S. State Department report on global terrorism discloses that in 2013 ‚Äúattacks by extremist Israeli settlers‚Ä¶were largely unprosecuted according to UN and NGO sources. The UN Office of the Coordinator for Humanitarian Affairs reported 399 attacks by extremist Israeli settlers that resulted in Palestinian injuries or property damage.‚ÄĚ

Archbishop of Jerusalem Fouad Twal questioned the Israeli government‚Äôs inability to respond appropriately and bring justice in crimes against non-Jews: ‚ÄúIn light of the fact that the great majority of vandalism acts do not lead to trials, we must ask if the government is willing to get down to the root of the problem?‚ÄĚ

Former head of the Shin Bet, Israel‚Äôs secret police, Carmi Gillon, shed some light on the phenomenon. He explained, ‚ÄúWe don‚Äôt see results, because we‚Äôre not intended to see them‚Ä¶ There‚Äôs no such thing as ‚Äėcan‚Äôt do‚Äô in the Shin Bet, just ‚Äėdon‚Äôt want.’‚ÄĚ In a radio interview, former Israeli army chief of staff Dan Halutz declared cryptically, ‚ÄúIf we wanted, we could catch them and when we want to, we will.‚ÄĚ

This is in sharp contrast to crimes against Jews, in which Palestinians, both guilty and innocent, are regularly apprehended and imprisoned‚ÄĒwith an almost 100% conviction rate‚ÄĒin a system of military law that affords them few rights.

This ongoing injustice and oppression by a majority government and some of its people has compelled many indigenous Palestinian Christians to flee the land where their faith was born. In 1947, just before Israel was established, the Palestinian Christian community made up 7% of the population and numbered about 140,000‚ÄĒcompared to roughly 630,000 Jews and 1.2 million Muslims. Today Christians comprise only 1-2.5% of the population of Israel/Palestine.

The birthplace of Jesus Christ will soon have no Christian presence at all, thanks to a brutal occupation not unlike the one Jesus experienced.

The lives of many of the Christians who remain in Israel and Palestine are dismal, a fate they share with their Muslim neighbors. Regarding the price tag attack at the Church of the Multiplication, they take little comfort in the guilty verdict, reserving any celebration until the sentence is handed down. Israeli courts have been notoriously lenient with Jewish convicts, more than once sentencing Jewish killers to community service.

How do people of faith become so merciless?

Radical interpretations of Jewish sacred writings, embraced by a small number of Israelis, bolster the most oppressive and discriminatory practices of Israel. Israeli author Israel Shahak explained that Jewish extremists ‚Äúare not basing their religion on the ethics of justice. They do not accept the Old Testament as it is written. Rather, religious Jews turn to the Talmud. For them, the Talmudic Jewish laws become ‚Äėthe Bible.‚Äô And the Talmud teaches that a Jew can kill a non-Jew with impunity.‚ÄĚ Such extremists ignore other Talmudic statements that contradict this stance.

Other sources that support Jewish superiority and tyranny include some of the lesser-known (or rather, nearly unknown) teachings of a well-known figure, Rabbi Schneerson, who lived in New York city (1902-1994). Schneerson led a religious movement, Chabad-Lubavitch (a form of Hasidic Judaism), from relative obscurity to become ‚Äúone of the most influential and controversial forces in world Jewry.‚ÄĚ

Schneerson‚Äôs more familiar writings and teachings‚ÄĒon subjects like education and charity‚ÄĒhave been published in English; some of his more controversial works are only available in the original Hebrew. However, authors Israel Shahak and Norton Mezvinsky have translated some of his more troubling teachings in their book¬†Jewish Fundamentalism in Israel¬†(text available¬†here) in an effort to expose the danger of extremism in Jewish faith‚ÄĒmuch like the extremism seen among practitioners of other faiths.

The following sample of Schneerson quotes are translations of messages published in Israel in 1965.

‚ÄúTwo contrary types of soul exist, a non-Jewish soul comes from satanic spheres, while the Jewish soul stems from holiness.‚ÄĚ

‚ÄúThe entire creation [of a non-Jew] exists only for the sake of the Jews.‚ÄĚ

Elsewhere, the chairman of the Jewish Rabbinic Council declared, ‚Äúa thousand non-Jewish lives are not worth a Jew‚Äôs fingernail.‚Äô‚ÄĚ

To repeat: this is not mainstream Judaism. These are the views of the most extreme religious leaders and zealots, but have influenced individuals with a supremacist paradigm, including the Price Tag perpetrators. Such ideologies can be seen on the fringes of all faith groups, and are consistently refuted by moderates of their communities.

When Price Tag first appeared in the 1980s, news of the attacks was not widely broadcast. Today, the internet brings these stories out in the open. The narrative of the victims has gained a hearing, and it is not attractive to the host state. (See this article and this video.) Israel is nervous‚ÄĒand is fighting back.

Israel‚Äôs Ministry of Strategic Affairs and Public Diplomacy has created a website and smartphone app¬†which are being used by ‚Äúhundreds of thousands‚ÄĚ¬†of Israel supporters to comb through social media. They use their keyboards to ‚Äúinfluence the conversation,‚ÄĚ ‚Äústop the hate,‚ÄĚ and ‚Äúend the lies.‚ÄĚ In reality, their assignment is to whitewash: to defend the reputation of Israel by neutralizing factual but negative press and repudiate unsavory but accurate news.

All of this may come as a surprise to American Christians. But after the initial shock, pro-Israel Christians are often quick to explain away or condone whatever Israel does as somehow part of ‚ÄúGod‚Äôs plan,‚ÄĚ instead of allowing their paradigm to be influenced by truth.

Should American Christians care about the facts? Should they be influenced by what Holy Land Christians have to say about the policies and practices of Israel? It makes sense to seek out the views of the indigenous people who know firsthand what is happening.

The Christians of the Holy Land are experts on the subject. They need to drive the Christian conversation about Israel.

What else do American Christians need to understand about their brothers and sisters in the Holy Land? That Christians and Muslims are bound together under Israeli oppression: the Muslim majority does not persecute Christians as western media would have us think. Archbishop Sebastia Theodosios, of the¬†Greek Orthodox Patriarchate of Jerusalem, stated, ‚ÄúWe the Palestinian Christians suffer along with the rest of Palestinians from occupation and hardships of our economic situation. Muslims and Christians suffer equally, as there is no difference in suffering for any of us. We are all living in the same complicated circumstances, and overcoming the same difficulties.‚ÄĚ

Christians in America have a moral obligation to differentiate between fact and ideology, to be compassionate, and to join the struggle for justice.

Kathryn Shihadah is a staff writer for If Americans Knew 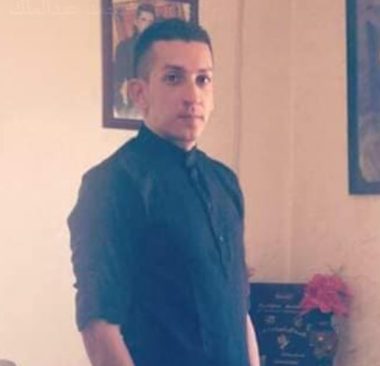