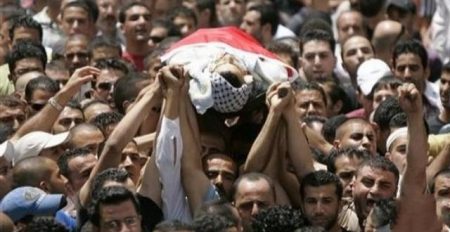 A statistic prepared by the Jerusalem Institute for Israeli and Palestinian affairs has shown that the number of Palestinians who have been killed, since the start of the Al-Quds Intifada (Jerusalem Uprising), which broke out in October of 2015, has now reached 265.

PNN reports that, according to the statistic, the Hebron district topped the list of provinces with 78 deaths, followed by Jerusalem with 57 deaths. Then, Ramallah with 24 deaths, and Jenin with 21, Nablus with 19, Bethlehem with 15, Tulkarem with 5, Salfit with 4, and Qalqilya with 3 deaths, two Palestinians living in “Israel”, and 34 from the Gaza strip.

119 of these people were killed since the beginning of the year 2016.

In addition, 75 of those killed were children under the age of 18, making up 29% of the overall number. This includes three-month-old Ramadan Thawabteh, who died of teargas inhalation in his hometown of Beit Fajjar, near Bethlehem.

24 of the slain were women,  12 of them minors as young as eight years old, including a two-year-old, Rahaf Hassan, who was killed alongside her mother in Gaza.

The study confirmed that 80% of the families had found about about their relatives being killed through the media, while  over 86% expressed dissatisfaction with the institutions that follow-up with the cases, accusing the media of failing to cover news about the incidents.