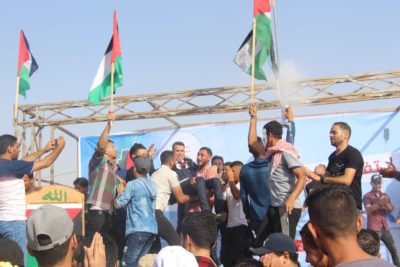 A day after Israeli forces “mistakenly” shot and killed a Palestinian security guard trying to prevent protesters from reaching the border fence with Israel, thousands of people turned out Friday midday to protest the escalation in ‘Great Return March’ protests in northern, southern and eastern Gaza.

One Palestinian couple used the occasion to celebrate their wedding, with their cheers and songs interjected by Israeli tear gas and shooting.

At least 40 Palestinians were shot and injured, while dozens of others suffered from tear-gas inhalation, as Israeli occupation forces suppressed protesters along the eastern fence of the besieged Gaza Strip, according to the Palestinian ministry of Health in Gaza.

A protester in Rafah was critically injured by live gunfire fired by Israeli soldiers towards the demonstrators.

Some local sources have reported that as many as 33 Palestinians were hit with live ammunition at Friday’s protests, and up to 55 total injured.

The protests took place as delegates from Egypt arrived in the besieged coastal Strip to try to negotiate with the Hamas leadership.

The Egyptians are working with the Israeli administration to try to get Hamas to agree to continue to hold to a fragile truce with Israel, which was broken the day before by Israeli forces who killed a civil official in Izz ad-Din al-Qassam Brigades, the armed wing of Hamas.

28-year-old Palestinian Mahmoud al-Adham was shot and killed by Israeli forces Thursday near Beit Hanoun in the northern part of the Strip, while trying to stop Palestinian teens who were going near the fence marking the border with Israel.

The Al-Qassam Brigades said that it would not let the death go “unpunished”.

Israeli Prime Minister Benjamin Netanyahu stated, “I prefer that there be calm. But we are preparing for a campaign that is not only broad but also surprising.”

Israel agreed to expand the fishing zone to 15 miles off the coast of Gaza – far less than what had been negotiated in previous signed agreements. In addition, Israeli authorities had recently agreed to allow more permits for some Palestinian laborers to enter Israel to work.

The 13-year old siege on the Gaza Strip has led to more than 80% unemployment, and a severe economic crisis that has been exacerbated by Israel’s periodic bombing campaigns against the imrpisoned and besieged population – more than half of whom are children.