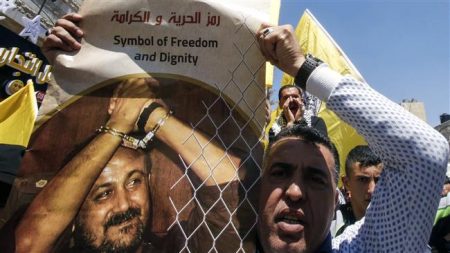 Officials presiding over the cases Palestinian detainees announced that 35 detainees from different factions would join the strike Sunday, according to Al Ray.

The striking detainees stressed that they will continue their battle until achieving their demands of improving life conditions within the prison system in accordance with international law.

The national committee for supporting the strike noted that no real talks have been launched between the striker detainees and the Israeli Prison Service (IPS).

Israeli officers of IPS claim that they will discuss the demands of the detainees, but the detainees have rejected any talks that do not involve the leaders of the strike.

More and more warnings have been raised regarding the health conditions of the striking detainees, as dozens of them have been moved to the prison clinic.

The detainees asked to end solitary confinement, administrative detention, among other demands including the allowance of family visits.