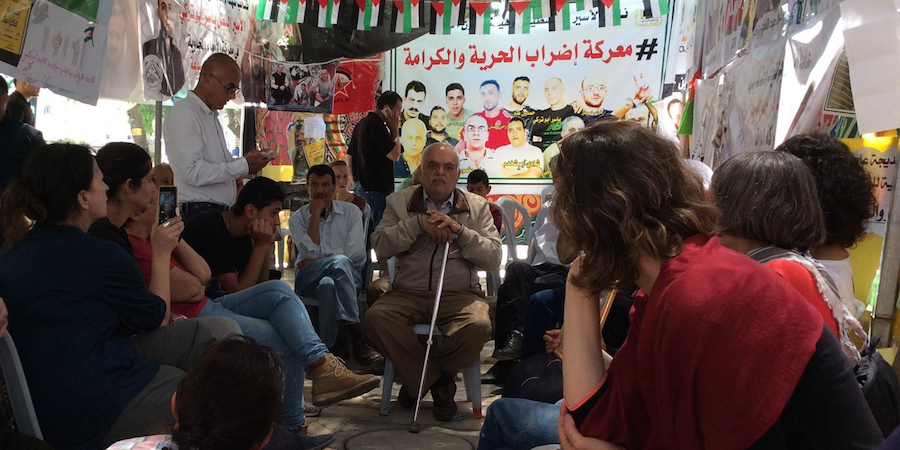 On Saturday, in Hebron city, a delegation of Israeli activists met with leaders of the Palestinian political parties, family members of prisoners, and representatives of the Hebron Defense Committee at a solidarity tent for the prisoners on hunger strike.

The tent is a locus for round the clock organizing and education in support of the hundreds of Palestinian political prisoners who have refused food since April 17, 2017. They demand their basic rights, including regular opportunities for family visitation, proper medical treatment, and an end to the use of solitary confinement and administrative detention.

Badran Jabber, a politician and leader in the Popular Front for the Liberation of Palestine (PFLP), updated the Israeli delegation on the situation in the prisons, emphasizing daily attempts by Israeli authorities to obstruct the prisoners’ struggle via punitive measures such as solitary confinement, raids, and transfers.

The mothers of Palestinian prisoners explained to the Israeli activists their ongoing suffering, as well as that of their incarcerated children.

The former political prisoner Abed al-Aleem Da’ana discussed the significance of refusing food as an act of political resistance as well as its physical affects based on his previous experience hunger striking.

To conclude, Hisham Sharabati, of the Hebron Defense Committee, commended Tarabout for their commitment to solidarity with the Palestinians, especially in Hebron city. Palestinian and Israeli attendees collectively emphasized the importance of solidarity at this critical time, 27 days after the mass hunger strike began.

The 20 Israeli activists in attendance are members of Tarabut (“come together”), a group in Tel Aviv committed to enacting a multi-issue social justice movement in view of ending Israeli occupation. The visit is a part of ongoing solidarity actions between Tarabout, Palestinian leftist political parties, the Hebron Defense Committee, the Alternative Information Center and many other civil society movements and organizations in Hebron.