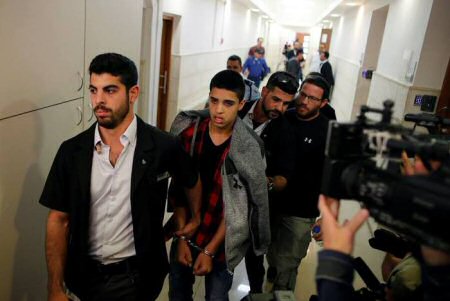 Marking Palestine Children’s Day, the PLO’s Prisoners’ Committee and the Palestinian Prisoners’ Society said that 353 Palestinian children had been taken into Israeli custody since the start of 2018.

In the statement, the two groups said: “In addition to being brutally arrested in the dead of night, they are sometimes intentionally shot with live ammunition during the arrest, insulted, tortured and put under heavy pressure to give false confessions.”

“They are also sentenced in absentia, pressured to pay high amounts of money as fines and sentenced to long periods.”

The statement said that these are only some of the Israeli “crimes” carried out against Palestinian children.

Between January 2017 and February 2018, Israeli authorities put 102 Palestinian children, most of them from Jerusalem, under house arrest, citing an increase of 15.5 per cent compared to the same period in 2016.

Since 2000 and the start of Al-Aqsa Intifada, Israel has detained at least 7,000 Palestinian children, many of whom while underage and turned 18 in prison.

The Palestinian children inside Israeli jails reached record numbers post 2009. In October 2015 there were more than 400 children inside prisons, including 116 between 12 and 15 years old.