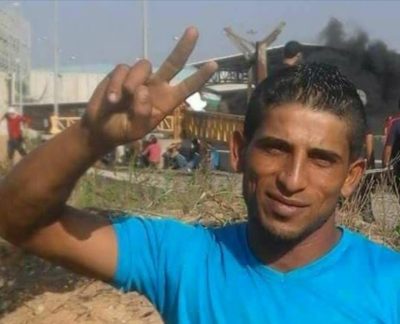 The Palestinian Health Ministry has reported that a young man died on Friday morning from serious wounds he suffered when Israeli soldiers shot him with live fire, last Friday March 30th, in northern Gaza.

The Palestinian, Tha’er Mohammad Rabe’a, 30, suffered serious wounds after being shot with live army fire, and remained in critical condition until his death.

Rabe’a is from Jabalia city, in the northern part of the Gaza Strip; his death brings the number of Palestinians who were killed by Israeli army fire since Friday, March 30th, to twenty-one, including the farmer, Wahid Nasrallah Abu Sammour, who was killed on his land early Friday morning before the Land Day protests began. More than a thousand Palestinians were injured by Israeli forces, many of them with serious or critical wounds from live gunfire.

List of Palestinian casualties on and after Land Day 2018, killed by Israeli forces for protesting peacefully at the border: