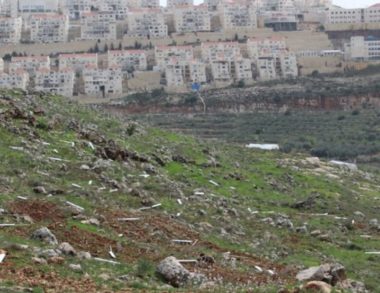 Al-Hroub is a Palestinian farmer from the village of Wad Fukin, located southwest of Bethlehem. His land is located at the edge of the 1948 Armistice Line, and where the Israeli colony (settlement) of ‘Tzue Hadasa’ was constructed from another side of it. The JAI supported Al-Hroub with 400 olive trees, and also had two international groups to help him and his family plant them.

The first planting day was through the Olive Planting Program in mid-February, and the second planting day was by Nord-Norge folkehøgskole students at the end of February. Each group planted 200 olive trees.

Al-Hroub witnessed the uprooting and destruction of his olive trees, and he tried so hard to stop the attack by showing the soldiers the official ownership papers of the land. The soldiers did not stop uprooting the trees, and when they finished, they confiscated all the trees and declared the land as a ‘State Land’. The Joint Advocacy Initiative (JAI) of the East Jerusalem YMCA calls on our partners and friends worldwide to:

– Spread the news about the attack, being on one of the Keep Hope Alive – Olive Tree Campaign fields and farmers.

– Write letters to your Parliament Members/Representatives, to condemn and put pressure on the Israeli government to stop such attacks.

– Write letters of complaint to the Israeli embassy in your country, individually, or as a group, church, or school.