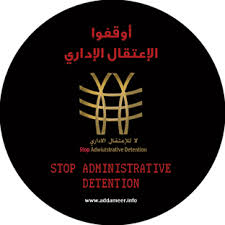 The detainees are protesting the sharp increase of Administrative Detention orders, holing them captive without charges or trial, in addition to constant violations against them.

Israel holds Administrative Detainees captive for months, and years in many cases, without filing charges against them, under the pretext of having “secret files against them,” files that even their defense lawyers do not have access to.

In administrative detention, a person is held without trial without having committed an offense, on the grounds that he or she plans to break the law in the future.

As this measure is supposed to be preventive, it has no time limit. The person is detained without legal proceedings, by order of the regional military commander, based on classified evidence that is not revealed to them.

This leaves the detainees helpless – facing unknown allegations with no way to disprove them, not knowing when they will be released, and without being charged, tried or convicted.