56 Palestinian Detainees on Hunger Strike in Solidarity with Bilal Kayed 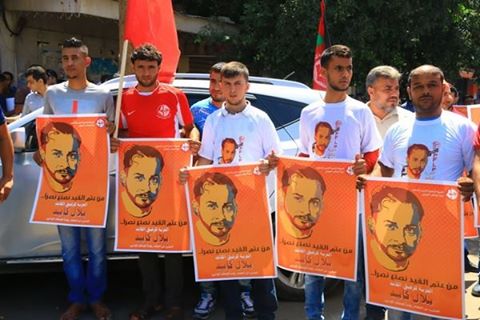 Kayed himself started hunger striking on June 15th, after Israeli authorities sentenced him to six months of administrative detention upon the expiration of his 14.5-year sentence in Israeli prison. Palestinian political prisoners worry that Kayed’s re-arrest following a lengthily prison term via an administrative detention order – i.e. without charges or trial – sets a dangerous precedent for all prisoners.

Israeli authorities have been harassing Palestinian political prisoners organizing for Kayed’s freedom by transferring them between prisons, raiding their cells, and assaulting them. The PFLP characterizes these measures as evidence of Israeli authorities’ escalating efforts to quash the struggle for Kayed’s freedom and that of all political prisoners.

On July 17th, Israeli authorities transferred Kayed from solitary confinement in Ashkelon Prison to Barzilai Hospital due to his deteriorating health. At the hospital, four Israeli prison guards remain in his room at all times. His room is also equipped with surveillance cameras and listening devices. Worse still, Kayed’s right hand and left foot are shackled to the hospital bed and the guards continue to pressure him to end his hunger strike. Kayed, however, remains steadfast.