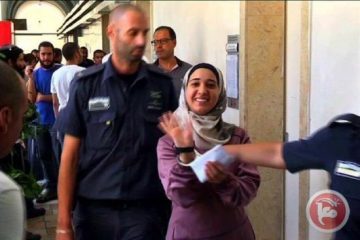 An Israeli court, on Monday, reportedly sentenced a young Palestinian journalist to six months in prison over charges of “incitement,” according to Ma’an.

The family of Samah Dweik, a 25-year-old journalist working for Shabakat al-Quds (The Jerusalem Network), said that she was detained in April, in her occupied East Jerusalem home, in the neighborhood of Ras al-Amud, over alleged “incitement” on Facebook.

This past May, the Israeli magistrate court in Jerusalem found Dweik guilty of posting “inciting” posts on social media.

Amjad Abu Asab, the head of the Jerusalem Committee for Families of Prisoners, said, in May, that Dweik had been detained after writing a status and sharing an image in support of Palestinians recently killed by Israeli forces.

In recent months, Israel has detained scores of Palestinians for social media activity, alleging that a wave of unrest that swept the occupied Palestinian territory last October was encouraged largely by “incitement.”
Palestinians have instead pointed chiefly to the frustration and despair brought on by Israel’s nearly 50-year military occupation of the Palestinian territory and the absence of a political horizon.

In May, the Palestinian Prisoners’ Center for Studies (PPCS) estimated that at least 28 Palestinian women had been detained by Israel since October over alleged “incitement” on social media, with six of them still in prison, including Dweik.

Most recently, Israeli military’s public prosecutor issued an indictment, on Thursday, against Tamer Tarayra — the brother of 17-year-old Muhammad Nasser Tarayra who was killed by Israeli forces after carrying out a stabbing attack on an illegal Israeli settlement in the southern occupied West Bank district of Hebron, killing a 13-year-old Israeli girl — for alleged “incitement.”

Muhammad Nasser Tarayra himself had reportedly expressed admiration on Facebook for Palestinians killed while carrying out or allegedly carrying out attacks, including his cousin, Yousef Mustafa Tarayra, who was shot dead alongside two other Palestinian youth, in March, after they allegedly carried out two consecutive attacks.

Israel has responded to the perceived threat of social media incitement by blaming Facebook for not doing more to censor posts promoting “terrorism” against Israelis.

Following a series of deadly incidents, Israel’s Public Security Minister Gilad Erdan reportedly said that Facebook chairman and cofounder Mark Zuckerberg had “blood on his hands” for not adequately cooperating with Israel to remove content.

An Israeli lawyer has filed a $1 billion lawsuit against Facebook Inc., claiming that the social media platform allowed members of the Palestinian resistance movement Hamas to plan and carry out attacks against Americans and Israelis.

In response to incitement claims against Palestinians, Palestine Liberation Organization (PLO) Secretary-General Saeb Erekat condemned the current Israeli government for its failure to “entrench a culture of peace and coexistence within Israeli society” in a statement last week.

Erekat flipped the script, holding Israel responsible for incitement, saying “official Israeli discourse entrenches hatred, racism, and discriminatory attitudes against Palestinians. The discourse is only further entrenched by the institutional protection that is given to those who commit or incite violence against Palestinians.”